We all have choices on how we are going to live our lives, and where we are going to place our focus.  My choice may not resemble your choice. I am a “reduced obese” person who has maintained a “normal” weight for more than 9 years, after a lifetime of Yo You Dieting. See ABOUT ME for details.

Doing this has required my constant vigilance, ongoing effort, and tremendous focus, and even though I have been more successful than 95% of everyone who has ever accomplished a large weight-loss, it is been a tremendous personal struggle, and year-after-year, despite CONSISTENT and CONSTANT effort, my weight has continued to slowly creep upward in small increments over time.

This is despite the fact that the recorded daily calorie average of my food intake has been dropping lower and lower each year.

These are my personal facts, based on numbers which I recorded as accurately as humanly possible, every single day for the past 10 years. For years I felt like Garfield in the cartoon below, but now... instead of yelling "Liar" at the scale, I mentally yell "Liar" or "You Idiot" at the 'Diet Experts' who smugly believe the B.S. and provide to us the results of bad Research, while asserting that "Science Doesn't Lie". 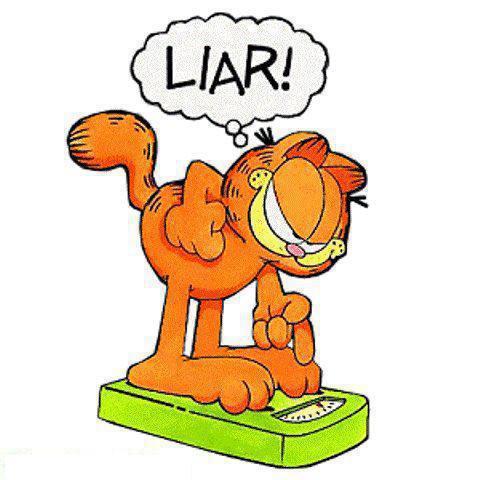 NOTE: that I am a 5’0” tall, 70 year old, sedentary woman with a lower than average metabolism, and according to the Mifflin formula, the AVERAGE woman with my numbers requires only 1237 daily calories to maintain her current weight.

I give you this information so you can see that my recorded calorie numbers are not as far out in left field as some of you might first suppose. You can’t accurately compare my body’s numbers with your own body’s personal calorie calculation requirements if you are larger, taller, younger, more active etc.

That said, the difference between 1237 and 754 is around 480 calories, which is a reduction of nearly 40% of the “Average” calorie requirement. Remember, THIS CALORIE AMOUNT is to MAINTAIN my current weight. . which right now is just above the BMI borderline of “normal”

The past 4 years of the DietHobby ARCHIVES contain many articles detailing and discussing my struggles to maintain my weight-loss. Very few people lose as much weight as I have lost, and only about 95% of THOSE successful people have achieved the type of maintenance success that I am currently exhibiting.

I often question how long I can continue to eat such excessively tiny amounts of food while watching my weight continually creep upward; whether I am willing to continue my current behavior for the rest of my lifetime; and I honestly don’t know. Right now, I’m just taking it one-day-at-a-time, while searching for Guidance.

I can vouch for the accuracy, and I do agree with the mindset, of the following article based on my own knowledge and personal experience.


Failed at Dieting?
Welcome to the Almost Everyone Club!
by Ragen Chastain, www. danceswithfat

A question that I get asked pretty often is “If dieting doesn’t work, how is it possible that it’s such a popular recommendation even by doctors?”  I’m glad that you asked!

For the last 50 years the research that has been conducted regarding long term weight loss has shown that weight loss almost never works long term.  Yet we are constantly told by the media, the government, our doctors etc. that anybody who tries hard enough can lose weight and keep it off. Plenty of studies have shown that the body has a number of physiological reactions to weight loss that are designed to regain weight and then retain that weight.

Yet we are told that those who regain their weight have just “gone back to their old habits.” But what really happens?

So a person begins one of a thousand intentional weight loss  (also known as a “lifestyle change”) programs.  They lose weight at first, then between 2 and 5 years after the loss they gain back all of the weight plus more, despite diligently maintaining their diet behaviors (aka “lifestyle changes”). They report these happenings to their doctor only to be told that they must not have been properly counting calories, they must have overestimated their movement. Their experience, they will be told, could not possibly have happened, it is impossible because…physics!  Or they tell their doctor that they couldn’t mentally and physically continue their dieting behaviors (aka “lifestyle change”) and are told again that they just weren’t trying hard enough.

All this despite the fact that their experience is exactly what the research tells us to expect. When millions of credible first person accounts match up with what research has found, typically that’s a good time to jump out of your bathtub and run around naked yelling “Eureka, I’ve found it.”

So why is dieting such a popular recommendation?  Those who are perpetuating this “weight loss works’ culture are doing a couple of things frighteningly well.

First, they are doing a great job of obfuscating the evidence.  Remember when a study found that Weight Watchers participants lost around about 10 pounds in six months and kept off half of that for two years (giving them a 3 year efficacy buffer but who’s counting) and Karren Miller-Kovach, chief scientific officer of Weight Watchers International at the time won the “I Said It With a Straight Face Award” when she told the media: “It’s nice to see this validation of what we’ve been doing.” Five pounds in two years.  Five pounds in two years.  Five freaking pounds in two freaking years?!?!?!?!?!.  But every time I say something about Weight Watchers people tell me how well it works (often, defying all logic, telling me that they’ve “done Weight Watchers 6 times and it worked every time“.)

Or the National Weight Control registry claiming to prove that weight loss works when the truth is that they would need 32,990,000 more success stories just to show a 5% success rate for dieting over the time they’ve been collecting data.  They’ve only managed to gather about 10,000 success stories since 1994, so they just moved the goal post and claimed victory at the fact that their numbers indicate that dieting works .009% of the time which means that if you walk to your Weight Watchers meeting in the rain you are three times more likely to die from a lightning strike than lose weight long term.

The second thing that they do alarmingly well is to discredit what are actually completely credible first person accounts of dieting failure.  Hundreds of thousands of people have diet failures every year.  Some of them have been convinced that they suddenly lost the ability to accurately maintain their diet behaviors, like people are saying “that’s weird, last week I could totally measure a cup of pasta but this week I forgot what a measuring cup is or how it works, so I just ate the whole package of spaghetti.”  They are told that they must be doing something wrong if they are regaining weight.  They are excoriated and discredited as “trying to justify their fatness”  (as if we need justification to exist in our bodies.)

But the diet industry and its cronies do it with shocking success.  Millions of people saying “I had the exact experience that research said was most likely” and somehow the diet industry, the government, and the medical establishment are able to discredit all of us in the eyes of the greater culture, often while continuing to profit.

This is all by way of saying that if you’ve tried dieting and ended up regaining all of your weight, or all of your weight plus more, then welcome to The Almost Everyone Club, we aren’t exclusive and we don’t have jackets (yet!) but we do have evidence and experience.  You have the right to claim and own the fact that you are indeed a credible witness to your experience, and you can refuse to allow someone else to substitute their completely  fabricated (and highly lucrative) experiences for your actual ones, and you can insist that they stop the diet roller coaster because you want to get the hell off.