Many of the posts in various diet forums
deal with the subject of Bingeing.
Recently, in one such discussion,
one of the members asked other forum members this question

“Have you ever examined when the binges occur,
what feelings you have before the binge?
I mean, have you ever considered they may be
a reaction or an acting-out to something other than food restriction?
I ask this because bingeing can be a form of self-expression.”

As a person who has struggled with a lifetime of bingeing,

I agree with the above quote, however...
I have spent MORE than 20 years in therapy dealing with this issue,
and the feelings surrounding it.

This made me feel much better about it,
and gave me emotional tools that have very helpful in my life.
BU FRANKLY all of that Therapy... plus the many, many self-help books,
and eating disorder tactics like Intuitive Eating
did little or nothing to reduce or eliminate binging.

Recently I began seriously considering
the possibility that my binges MIGHT well be a
"reaction to something other than food restriction".

MAYBE it isn't basically a psychological problem.
MAYBE it IS REALLY a physical reaction to the way the chemicals
in some of the specific kinds of foods that I eat interact with my own body.

Many Diet Gurus are very clever.
BUT Cleverness is not Wisdom.

Clever = cleverness:
1. mentally bright; having sharp or quick intelligence; able.
2. superficially skillful, witty, or original in character or construction; facile: It was an amusing, clever play, but of no lasting value.
3. showing inventiveness or originality; ingenious: His clever device was the first to solve the problem.

Wise = wisdom
1. having the power of discerning and judging properly as to what is true or right; possessing discernment, judgment, or discretion.
2. characterized by or showing such power; judicious or prudent: a wise decision.
3. possessed of or characterized by scholarly knowledge or learning; learned; erudite: wise in the law.
4. having knowledge or information as to facts, circumstances, etc.: We are wiser for their explanations.

Many people think of calories like money in the bank.
We get x number of calories a day to “spend”
(taking into account height/weight, age, gender & activity level).
Valuable little commodities to do with what you will.

Living the thin lifestyle, I also tend to think of calories
like having money in the bank,
and how I get to decide to spend those calories every day.

I track my calorie bank account with my computer software program.
It makes life a little more manageable,
and is extremely helpful for weight-loss and for weight maintenance.

We can also compare calories to money in the following way. 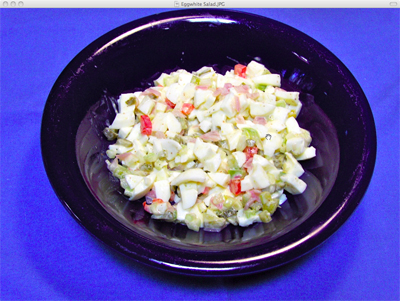 Recently I posted another video, Egg White Salad,
which is located at DietHobby, under RECIPES, MiniMeals.

This is a low-carb And reduced-fat And low-calorie recipe
that is surprisingly tasty.

They come every week.
...right after Sunday

I am energized once again
to work at eating only the amount
that my body needs to maintain it's current weight
...or maybe to lose some of it.

Funny how that happens.