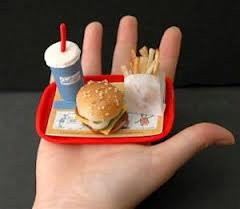 When Jefferson was the principal author of the Declaration of Independence in 1776, he was around 33 years old, and he lived until age 83 during a time when food was not as easily obtainable. Even though he did not experience our modern readily-available-highly-processed-food world he seemed to understand the value of eating less.

How little is "too little"?

Many overweight and obese people appear to have an irrational fear of starvation mode.
However, one really can't eat too little for weight loss - Starvation Mode (the way most dieters define it) is a Myth.

"Starvation mode" is a phrase that gets thrown about loosely. Many people think that eating below 1000 to 1200 calories a day, will cause their metabolism to slow down so much that their body will stop losing weight. The reality is that until a male has only 5% excess body fat, or a female has only 10% excess body fat, it is very unusual for a person to go into “starvation mode”.

When it seems impossible for a dieter nearing goal to lose weight, they assume their metabolic process is slowing down, and think that they are “in starvation mode”. However, people with extra weight obtainable to oxidize, can oxidize extra body fat per second. The less human body fat one has, the less fat oxidized for each moment. So as one gets closer to the body’s individual reduction limit of human body weight, the slower one will burn up what body fat one has. This is why taking off the final 10 pounds happens very slowly, NOT because one is wrecking one’s metabolic process with an aggressive diet regimen.

By the way, I’m using the term…”excess fat”… to define the entire genetic make-up of an individual body, not “troublesome” fat on specific body areas that one wishes were leaner… like stomach or thighs, etc. It is not uncommon for someone who is “normal weight” or even “underweight” to be unhappy with the way their own body’s necessary fat is genetically distributed.

The article quoted below makes a number of good points:

Are You In The Starvation Mode or Starving For Truth?

Recently we discussed the myth that dieting can lead to an eating disorder and saw this common dieting myth was inaccurate.  Another common dieting myth held by people is that they may not be losing weight because they are in the "starvation mode" from eating too few calories. And, in response to the intake of this low calorie level, their body has gone into "starvation mode" and slowed down their metabolism and is holding on to the weight. The usual recommendation to get out of starvation mode and allow the body to lose more weight, is to consume more calories. Eat more calories, to lose more weight.

Well, for anyone struggling to lose weight, this may sound sensible, but as you will see, it, like most other dieting myths, it is inaccurate. A few things to consider before we get to the "starvation mode."

First, the human body, as is our world, is governed by the laws of physics. Body weight is a product of energy balance. We can not violate the laws of physics and thermodynamics. The energy we consume must go somewhere, and to maintain a certain level of weight, an equivalent amount of energy must be consumed and an equilibrium must be achieved.

Second, in regard to metabolism, about >70% of our base metabolism is driven by our brain and other vital organs and is not really effected by food consumption as I discussed in the metabolism blog. We have little impact on this basal metabolic rate.

Third, most attempts to accurately track food consumption under report (intentionally and/or not intentionally) by about 30% and attempts to track exercise and activity levels over report by up to 50%. Even professionals can be as much as 30% off or more. This is usually part of the problem. Fat people are not accurately able to determine their caloric intake and output.

Now, in regard to the "starvation" mode, someone who has extra body weight and body fat is not in any "starvation mode" where they need to 'kick start" their metabolism by eating more calories. You can not "eat more" calories to force your body to "lose weight".

In regard to metabolism, if you are overweight/overfat, you can not cause your metabolism to decrease below a level needed to lose weight while you have extra weight/fat on you, and you can not "lose more weight by eating more calories/food." This is a misunderstanding of the principles of metabolism that does not apply to overweight people trying to lose weight.

Let's say we look at someone who says they are only eating only 800 calories and not losing weight. A well meaning and good intentioned friend (or professional) has told them they are in starvation mode and in order to lose weight and/or kick-start their metabolism, they need to eat more. But, what if instead of eating more, what do you think would happen if instead they just stopped eating altogether? Would they go further into starvation mode and continue to stay at the same weight or maybe even "gain" weight?

Clearly, they would lose more weight if they stopped eating altogether.

We all know (especially those who are familiar with fasting) that if you were to stop eating completely and just live on pure water, you would start to lose weight almost instantly and would continue to do so.

But according to this theory of the "starvation mode," if you were really in it and you fasted, by its own rational you would lose less weight ... if any at all, not more. We know this is not accurate.

So, where did this myth come from?

There is a true phenomenon known as the starvation response and it is well documented in the Minnesota Starvation experiments and the Hunger Fasts that have been studied. However, it only happens in humans when they lose enough body fat that they fall below the level of essential fat. In a man, this would be below around 5% fat and in women just above that, about 10%.

Most humans will look like holocaust survivors at that time. Here is a picture of some of the subjects from the famous Minnesota Starvation experiments from the 1940s. 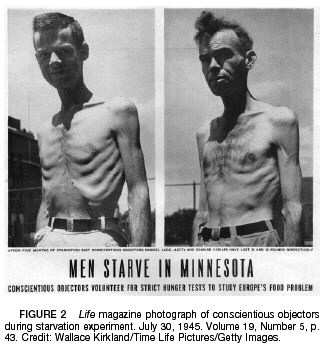 Even at this point, after months of a low calorie diet with heavy exercise, they were not yet in the so-called "starvation mode" where they experienced significant metabolic changes. If you have more weight/fat on you than them, then neither are you

In addition, when this point is truly reached, the body does make several metabolic shifts to preserve itself, and if it is not fed more calories, can cease to exist. It is a matter of life and death. Hence the name.

This is not the same thing that happens when someone who is overweight and has a high percentage of body fat, is not losing weight. Usually this is due to an inaccurate assessment of their energy balance.

Now, it is possible that a medical condition, like hypothyroid could contribute to a slowed metabolism. However, if someone was to have a thyroid problem, it can be diagnosed and treated. But, then we are right back to my points above and dealing with an energy balance issue.

So, if you are overweight and/or overfat and not losing weight, the most important thing to do is re-evaluate your energy balance. And the best way to do this is to focus on foods that are low in calorie density (and high in nutrient density) and maintain a healthy level of activity.

The above-article was written by Jeffrey S. Novick, MS, RD, LD, LN, in January 2009 at www.healthscience.org