Body Mass Index: What about the BMI?

No one wants to be in the "Obese" category,
because that label goes past a little bit "Overweight",
and defines one as actually too "Fat".

The numbers I previously posted in  "Normal, Overweight, or Obese"
are standard BMI (Body Mass Index) numbers.
BMI categories are:

Many athletic people who are carrying a lot of muscle under their fat strongly
protest that their muscles make them an exception,
and therefore they don't fall into the standard BMI categories.

However the following quote from Bodybuilding expert, John Barban, is very on Point about this issue.

BMI chart – What is all the Fuss About?

I was reading a blog about the BMI (Body Mass Index) chart the other day and noticed that many people were saying that it’s not accurate and is an outdated measurement and needs to be replaced/revised.

So I started to think about why anyone would say this. The BMI chart was created over 100 years ago as a way of charting body ‘fatness’ or ‘thinness’. With the influence of Ancel Keys (visionary scientist way ahead of his time) BMI became a prominent tool in the 1970′s for assessing population health risks.

There is a criticism that the BMI doesn’t account for different ‘frame’ sizes of people (endomorphs and ectomorphs) or athletes who have built up their muscles to a much larger degree than the regular population. Both of these criticism’s seem to be weak as true ecotmorphic or endomorphic people are very rare…in other words, for MOST of the population the BMI works just fine, and that was the point in the first place.

The athlete argument doesn’t hold much water either, as they represent a very small percentage of the population and many of them at all levels use steroids and other drugs that artificially elevate their lean body mass. In other words, the BMI was never meant to be applied to people taking steroids and GH.

So what about ‘natural’ athletes and bodybuilders who don’t use drugs but just build lots of muscles? Surely they wouldn’t be in the ‘normal’ BMI range…right? Wrong!

A few days ago I posted pictures of myself after a 5 day fast (I weighed 176 lbs in those pics…granted this was mostly a water reduction)…as of the moment I am writing this my bodyweight fluctuates between 180-183lbs. In both cases I am still within the normal BMI range. And this is where the argument about athletes being in the ‘overweight’ BMI range because of increased muscle mass falls apart for me.

In these pictures -> DO I LOOK SKINNY? I’m well within the normal BMI range…and I don’t think I look too small or lacking in muscle development. In fact I’ve spent the past 15 years trying to build as much muscle as I can…and I STILL fall within the ‘normal’ BMI range. If anyone was a candidate for being ‘overweight’ due to muscle mass I thought surely I would be it…but nope I’m still ‘normal’.

So the argument that athletes can build enough muscle to somehow push them out of the normal BMI range seems a bit wonky to me (unless of course they are using steroids or were true endormorphs to begin with…which is an exceedingly small portion of the population). Look at those pictures of me again, do I really look like I could possibly get bigger? Do I look like I NEED to be bigger? AND do I look unhealthy at the size I am?

The problem people have with the BMI is not the chart itself, but what the chart MEANS to them. The chart is meant to show ‘fatness’ and categorize it as normal or abnormal on both the high and low end. The key word here is ‘normal’.

What SHOULD be normal for a human body and what has BECOME normal in modern western societies are two different things.

The BMI chart shows what SHOULD be normal, not what is currently considered normal.

I think many people have a sharp emotional reaction to things like the BMI chart because it categorizes you in a way that feels discriminatory and prejudicial. Of course there is no emotion behind the BMI chart, it’s just a mathematical equation…but there is some thought and research into it, it’s not just a random idea, so you know there is some validity to the category you’ve been placed in according to the chart. And this is why it bothers people. If there is some good reason why you are categorized as ‘overweight’ then you’re faced with the following dilemma about your belief in the normalcy of your current body size:

Either the chart is wrong, or YOU are wrong.
It’s much easier to dismiss the chart as being inaccurate and not useful for your specific body shape and size or whatever excuse you like, than it is to accept the fact that perhaps you’re in fact simply overweight.
The final point on this topic is the view from being in the normal category vs the overweight or obese categories.

I used to be much heavier than I am now and I used all the same excuses explaining away the BMI as antiquated and outdated and didn’t account for the mountains of muscle I had built over the years. In reality, I was just fat.

Once I went through my cut down and got rid of all the excess weight I ended up right where the BMI chart predicted me to be at the high end of the normal range…which makes perfect sense as I’ve built as much muscle as I can without drugs.

If I’m currently in the normal category, and I’ve spent my whole life trying to build muscle, and all of my measurable health markers are in very good shape, and I’m happy with the look and shape of my body, and I have a golden Adonis Index ratio…then how is it possible for me or anyone with roughly my frame (which is average) to actually be in the overweight category without simply having more fat mass on their body and subsequently looking worse than I do right now?

In other words, if some people suggest the BMI cutoff for ‘overweight’ is too low, then what does that make me in these pictures? Underweight?

Or is it that people who don’t like the category the chart puts them in immediately react by dismissing the chart as being wrong instead of heeding the guidance it provides to lose some weight. This of course is cognitive dissonance at its finest.

For anyone who is in the ‘normal’ range the BMI chart seems to make perfect sense, or at least it does to me.

by John Barban, Bodybuilder,  (www.johnbarban.com)
who currently has a business association with Brad Pilon, the author of Eat Stop Eat.

Here are the pictures which are referenced in the quote above. 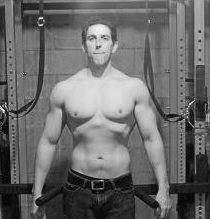 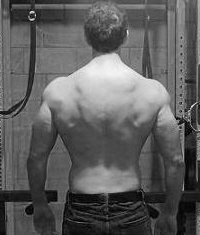