22 years ago at age 47, weighing 271 lbs. at a height of 5'0",  I had an RNY gastric bypass, open surgery, with NO removal of any intestine, which means that every calorie I eat is still digested, and still counts.

The doctor's recommendation for post-surgery eating was simple. "Eat three meals a day of whatever food you want, but make half of each meal protein; avoid fried foods and sweets; and have no carbonated beverages."

My surgery was done when the procedure was still considered experimental.  At the time, it was performed here in California by only a few doctors. To get surgery, people had to travel to San Diego, stay in the hospital 2 or 3 days, then stay at a local hotel for an additional 10 post-surgery days before being released to return back home.  Follow-up care was received once a month during the surgeon's visit to one of the nearby temporary clinics located in various cities throughout California.  About five years later,  surgeons all over California began setting up specialized practices for weight-loss surgery, and coordinated with nutritionists who made specific post-surgery diet recommendations like protein shakes etc. That happened several years before laser surgery became common.

The first year after surgery my body would tolerate very little food.  Eating more than one-quarter to one-half cup of food at a time made me feel uncomfortably stuffed like after Thanksgiving dinner.

I frequently experienced Dumping syndrome, which is caused by food passing too quickly into the small intestine. This caused immediate symptoms of flushing, weakness, fatigue, dizziness, and an intense desire to lie down. Severe episodes include feelings of nausea, and even stomach cramps.

I experienced severe dumping symptoms after just a swallow or two of fruit juice; or one or two bites of fried-or-greasy food; or a bite or two of any sweet like cookies, cake, pie, candy. I also became lactose intolerant. Milk made me feel ill, and even the tiniest bit of ice cream, with it's combination of milk and sugar, immediately made me lie-down-with-dry-heaves-ill.

Therefore, due to my weight-loss surgery, that entire first year my food intake was somewhere between 200 to 600 calories a day, which caused my weight to drop from 271 down to 161 lbs .... without dieting. This happened while I ate however much I could, of whatever food my body would tolerate.  The reason I did not binge, cheat, or quit, even when my weight-loss was slower than I believed I deserved, was because it was physically impossible for me to do so.

Most people think that weight loss after WLS always happens rapidly.  That immense amounts of weight fall off everyone's body every week, 5-10-15 pounds, week-after-week, like on the Biggest Loser tv show.. only maybe even faster.

However, Real Life AFTER a Gastric Bypass Surgery, works just like Real Life BEFORE a Gastric Bypass Surgery.  Even though after a RNY surgery Everyone has a smaller stomach, and Everyone eats just a small amount, the rate of weight-loss continues to be an individual matter.  Some people's bodies simply drop weight faster than other people's bodies, and surgery doesn't change that fact.

Below is a graph of my own individual weight-loss results. This is what happened to MY body during the 64 weeks after a RNY gastric bypass surgery.  I did not diet during that time, but the surgery severely restricted what I ate, and the amounts I ate. I was physically unable to cheat, and I was physically unable to quit.  Plus, of course, I was strongly motivated to lose weight.  Remember, I was a 48 year old, sedentary female who was only 5 ft 0 in tall. 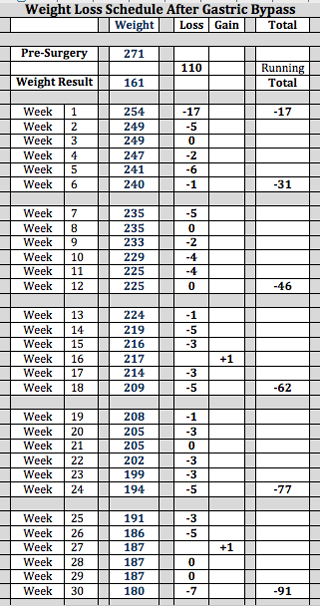 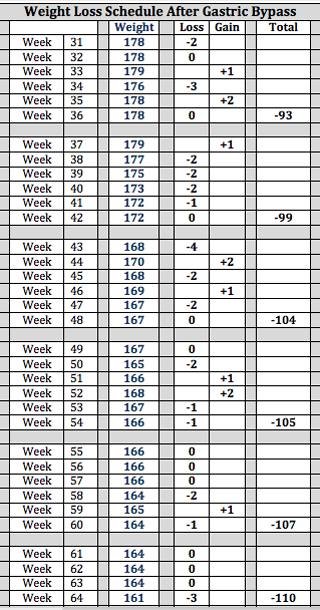 For the next 2 to 3 years I maintained in the 160s while eating as much food as my body would tolerate, however, my stomach begin stretching, and my body began to tolerate more food, and again, I had to begin dieting to keep my weight down.

For the next 10 years, I worked at dieting to keep my weight down, but my weight kept creeping up. I felt I simply could not bear weighing over 200 lbs again, after all my effort, pain, and expense. My struggle to avoid gaining more weight allowed me to maintain in the 190s for several years.  In September 2004 I began logging my food into DietPower, which is a computer software food journal that I discovered online.

At that point, I begun losing weight, and about 16 months later, after working to eat a daily average of approx 1230 daily calories, I reached my goal weight of 115 lbs.

During all of the 8+ years since that time I've been working to maintain at or near that goal weight.

SO ....to summarize the NEXT SEVERAL YEARS:

Maintained in the 160's the following 2 ½ years until weight crept into the 170s.

For further information see the section ABOUT ME here at DietHobby.