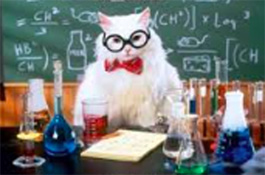 The Best Online
Calorie Calculator,
According to Science.
But it might not work for you.

Another free online calorie calculator, the Body Weight Planner, is now available to the public after several years of being used as a research tool for scientists at the National Institutes of Health. This one is noteworthy because its algorithms were validated in several controlled weight loss studies in human beings, and because it takes into account a person's slowing metabolism.

Kevin Hall, a scientist at the NIH's National Institute of Diabetes and Digestive and Kidney Diseases, created the tool.

Dr. Hall says the 3,500-calorie rule is accurate only if a pound of human fat is burned in a lab.  However, unlike a lab, the body is not a static environment, and instead adapts when a person changes their diet and exercise.

As a person diets and loses weight, the body slows the metabolism in an effort to conserve energy. As a result, eating 500 fewer calories a day leads to slightly less weight loss as time goes on. 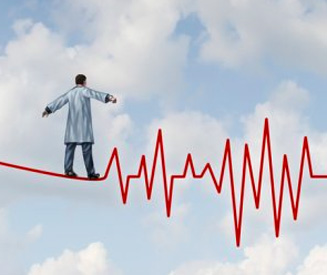 Dr. Hall said that the biggest flaw with the 3,500-calorie-rule is that it assumes weight loss will continue in a linear fashion over time. "That's not the way the body responds. The body is a very dynamic system, and a change in one part of the system always produces changes in other parts.”

He admits that dieters may be “bummed out” by news that they must double their efforts at reducing calories. “But we believe it's better to have an accurate assessment of what you might lose, that way you don't feel like a failure if you don't reach your goal.”

The BWP calculates how many calories a day a person should eat to achieve their weight loss goals in a certain time (for example, to lose 10 lbs within a year).  The link can always be found here in DietHobby, under RESOURCES, Links, Body weight Calculator - NIH (Timeline Projections).

The NIH bills the planner as a cutting-edge tool that will empower people to take their health into their own hands, but research on the success of such calculators and trackers is mixed.  Although the federal government is to be praised for its official nod toward the utility of trackers and calculators,  human beings themselves are not “simple machines” who operate on a calories in, calories out basis. 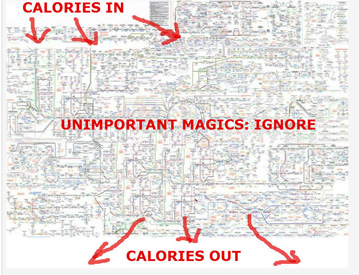 “Calories out” is not under our conscious control.  There are many metabolically active tissues, including brain, kidneys, heart, liver, etc whose activity is very difficult to measure. There are numerous hormones and enzymes and genetics involved in our individual metabolic processes…and some of these are still undiscovered.

We make the incorrect assumption that our only variable that changes is the energy we spend in voluntary exercise or activity.  This is also not true.  Basal Energy Expenditure is not stable and can change up or down 50%.  Reducing Calories In reduces Calories Out. They are not independent of each other.

This isn’t news to anyone who has ever seriously tried to lose and maintain weight. A London research study released in July 2015 that tracked 278,982 participants, using electronic health records from 2004 to 2014 estimated that for people with a 30-35 BMI (Stage 1= obesity), an obese man’s chances of reaching a normal body weight (<25 BMI) were 1 in 210 for men, and 1 in 124 for women. For the severely obese-people with a 40+ BMI (Stage 2+ =severe obesity+), only about 8 percent of obese men and 10 percent of obese women were able to lose five percent of their body weights.  Almost all of the participants who achieved weight loss regained it within five years.

Calculators can't provide prescriptions for weight loss or protections against regain. They don’t apply equally to every single individual, and are merely averages ... standardized guidelines. The problem is that not all metabolisms, circumstances and eating habits are standardized.

For example, if a professional athlete walked at 3 miles per hour speed for a half hour, that athlete would burn calories totally differently than an average non-athlete who was the same exact weight.

Many factors are at play when it comes to how people consume and burn calories. Environment matters, for example. Also, everything from stress, to genetics, to cultural influences plus more, can affect an individual’s dietary habits and exercise levels.

Emerging research shows that even gut bacteria affects a person's ability to absorb calories. For instance, food may be absorbed as three calories in a lean person and seven calories in an obese person simply because of differences in how gut bacteria breaks down the meal.

Therefore, it is unreasonable to expect ANY calculator to give everyone a full and accurate game plan.

In the video below, Dr. Hall demonstrates how the calculator works by using his own weight loss goals as an example:

Hall, a 44-year-old man who wants to lose 20 pounds off his 5’10, 180-pound frame, is going to have to eat about 2,300 calories per day, provided he sticks to his resolution to walk his dog in the mornings three times a week. Once he reaches his goal weight, he’s going to have to maintain that weight loss by keeping up his dog-walking activity level and eating about 2,600 calories a day.