More About the Starvation Mode Myth 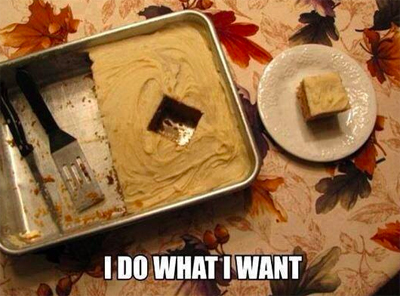 Yesterday, I was encouraged by a statement made by an Obesity Expert, who didn't mean it to be encouraging.  That statement was:

"...there are almost no limits
to short-term weight loss goals
(anyone can starve themselves thin)... "

There are unlimited ways to starve oneself. I just need to find one that works FOR ME.  Preferably one allowing me to take one or two bites of the piece of cake pictured here.

But, Starving?  Being hungry is bad enough, but what about "Starvation Mode"?

There are a number of nutritional myths within the dieting world. One of the ones that I find most annoying is the Starvation Mode Myth.

It is true that if you don't eat for a long enough period of time, you could starve, meaning die from hunger. Today, starve is also used to describe less severe limitations on food, such as when you tell your friend, "I have to go to lunch now. I'm starving." This is a way of describing discomfort caused by hunger.

The term “starvation diet” is an example of extreme dieting, in which someone tries to cause weight-loss quickly by cutting calories to less than half of what they need. Taking in fewer calories overall typically results in weight loss, which causes the body to do what it can to conserve energy, and a starvation diet takes that concept to the extreme.

"If you don't eat enough, you won't lose weight!"

The problem with this idea is that, if it were true, no one would die from starvation and obviously people do. Clearly, even if you eat what is obviously too few calories to be healthy, such as an anorexic does, you will continue to lose weight.

So where did this idea -- that not eating enough calories makes you not lose weight -- come from?

It started with the famous Minnesota starvation study. Some normal-weighted men agreed to live on a compound where their exercise and diet was strictly controlled. For portions of the study, they were on a "starvation diet" which is defined as 50% of the calories your body needs to maintain its body weight.

The Mifflin formula charts say that a “normal” woman of my age, size, and activity level requires 1210 calories per day to maintain her body weight. My own detailed food journal records indicate that for the past several years, my weight has been creeping upward while eating an average of 1020 calories per day.

About 25 years ago, weighing about 220 lbs I went on a starvation diet for 6 months – a medically supervised liquid formula only diet of around 300-500 calories per day. I lost down to 145 lbs during that time. A 75 pound loss, averaging about 2 ½ lbs weekly.

About 22 years ago, weighing 270 lbs, I went on a starvation diet for a year plus, as a result of a RNY gastric bypass surgery for weight-loss. I was able to eat only about 300-600 calories per day, and lost down to 160 lbs during that time. A 110 pound loss, averaging about 2 ½ lbs weekly.

So, during my lifetime, I’ve been on at least two long-term starvation diets. Yet I lost weight just fine during those periods -- better than fine, really. Most of the people on The Biggest Loser are also on starvation diets. They might eat a bit more than me but they also exercise strenuously 6-8 hours a day. So they are usually below 50% of their calorie expenditure for the day. They seem to lose weight quite well.

How can this be?!

The answer lies in what actually happened to the Minnesota guys when they were on their starvation diets.

Like most of us on a diet, their metabolisms did slow down. In fact, after they'd been on this diet for a while -- we're talking months, not days here -- their body fat percentage got to a point below what is considered minimal to live on (about 5% for a guy, 6% for a gal). At this point, their metabolism had slowed down as much as 40%. But -- and this is the important point for those of us on a diet -- they continued to lose weight. Even with that big of a slow down in their BMR (Basal Metabolic Rate), they were still operating at a great enough calorie deficit to lose.

If this is true with a 40% slow down, it's even more true when the slow down is somewhere in the 15 - 20% range, which is what happens with normal dieting.

Take an individual who needs 2,000 calories per day to maintain their current weight. Assuming calorie expenditure remains the same, they will lose (approximately) as follows:

As you can see from the table, once you go below a certain calorie level, you aren't getting the weight loss you'd expect. This is because your BMR will go down more if you eat only 500 calories compared to eating 1500. But, as you can see, you are still losing more than if you were eating 1000 calories.

This is a lot different than the "no" weight loss that the "starvation mode" myth touts.

The other important point to note about this study is that it was performed on normal-weighted men. When starvation studies have been done on the obese, they find that the impact of the starvation diet is much less. Our bodies have fat stores designed to get us through a famine (i.e., a diet) and when we have a famine (i.e., a diet), those fat stores get used. The drastic slowdown of the metabolism doesn't happen until those fat stores are largely gone -- which takes a lot longer for the obese than for those who only have to lose 10-25 pounds.
So why are we told not to go under 1200 calories a day,

unless under a doctor's supervision?

First  that recommendation applies to average-to-large, normal-to-obese-size people.  Next, it's primarily because the more you reduce your intake, the harder it is to get the nutritients you need from food. If you are on a very low calorie diet, regular vitamin and mineral supplementation is a must because some deficiencies can kill you.

Another reason not to go below a certain calorie expenditure is that human beings are not machines and, unlike the guys in the Minnesota study, we aren't living on a compound with our activity and food strictly controlled. As a result, when we reduce our calories substantially, there is a tendency to subconsciously (or even consciously) reduce our calorie expenditure.

Exercise makes people feel more hungry, and it also makes them feel more tired. When you combine this with our tendency to under-report what we eat and over-report our exercise, and you can see how this can lead to great inaccuracies.

As an example, even if I choose not to eat more after spending a morning engaging in extensive exercise, my body still insists on resting for the remaining portion of that day which, for me, includes a long afternoon nap. Obviously this causes my day’s calorie expenditure to be lower than if would have been if I exercised without resting or taking a nap.

If I’m eating at a calorie deficit, I’d still lose weight, whether I exercise or not. But if I was only eating 500 calories for months at time, I wouldn’t feel much like exercising to begin with, plus I’d still be taking frequent naps. Less exercise and more napping would impact my weight loss because they would decrease my calorie expenditure.

Eating more to lose weight is generally an ineffective diet strategy. While eating more over time might allow a “normal” person to exercise more, it simply means that as a result of this exercise, their rate of weight-loss or weight-gain won’t be as much as it otherwise would have been when the number of calories they eat goes up. While this might also cause them to be happier because they are more fit and feel healthier, the Bottom line is: Whatever total calorie number one’s individual body burns as survival energy …. eating LESS calories than that number is the only way anyone can achieve any kind of fat loss.

Long-term weight-loss maintenance involves the same issues, multiplied by infinity.
See, Running Down the Up Escalator.