When Can Women Stop Trying to Look Perfect? 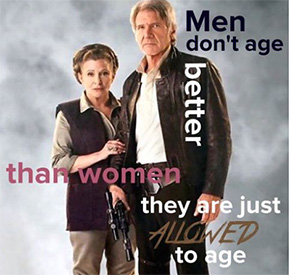 The article below is a keeper.

It definitely
belongs  here in my
DietHobby online scrapbook.

As a lifelong devotee of fashion and tabloid magazines, I’ve read dozens of “Beautiful/Sexy at Any Age” features. You’ve probably seen these spreads, showcasing a bevy of lovely women whose faces, fashions, exercise routines and skin-care regimens are laid out to encourage imitation. For years, readers could stare at starlets and actresses and singers in their 20s, their 30s, their 40s and even edging bravely into their early 60s.

Then — nothing. While Vogue’s most recent “Age” issue expanded its range to include a runner in her 90s, and People’s “World’s Most Beautiful” made room for 75-year-old Jane Fonda in 2013, those are exceptions. It’s as if, for the purposes of good looks and sexiness, older women simply cease to exist. Or maybe they turn 60 and go marching, “Children of the Corn” style, into the racks at Nordstrom, never to be seen again.

On one hand, it’s obvious discrimination. The Golden Globes are Sunday night, and the red-carpet parade is likely to include the nominees Lily Tomlin and Maggie Smith, Helen Mirren and Ms. Fonda, proving that a woman can be stunning and stylish when she’s 70, or beyond.

On the other hand, those magazines always gave me — and, I suspect, other female readers — a little hope. Reading into the absences, you could make out a finish line, a point at which you were no longer expected to perform what sometimes feels like a woman’s major duty in life — looking good for men. You could bobby-pin the “babe” tiara atop the next generation’s head, throw away your Spanx and your food scale and enjoy your accomplishments, your grandchildren, your free time.

Sadly, recent events suggest that the finish line has moved — if it existed at all. Consider the fuss over Carrie Fisher, who reprised her role as Princess Leia Organa in “Star Wars: The Force Awakens” almost 40 years after her debut in the original “Star Wars,” when she was 19.

In the decades since the first film, both the actress and her character have dealt with a lot — mental illness and addiction in Ms. Fisher’s case, intergalactic warfare in Princess Leia’s. One might assume, what with the Dark Side to contend with, that the princess-turned-strategist might have found herself too busy to attend Pilates class, or to hunt down coconut flour for paleo pancakes.

But the “Force Awakens” filmmakers determined that Leia should not only be smart and powerful, but she needed to be slender, too. “They don’t want to hire all of me — only about three-quarters!” Ms. Fisher said.

She ended up losing weight for the role. Still, some fans were displeased. Online discussions about Ms. Fisher’s looks raged across social media. When the actress objected, tweeting “please stop debating about whether OR not I have aged well. Unfortunately it hurts all 3 of my feelings,” Kyle Smith, writing in The New York Post, swiftly put her in her place. Ms. Fisher should be as grateful to the studio for making her drop the pounds as she’d be if they’d forced her to quit heroin or cigarettes, he wrote, lazily equating “thin” with “healthy.” Never mind that many of the medications used to treat bipolar disorder can cause weight gain.

But the scorn didn’t stop there. “If she didn’t want the public to talk about her, she could have spent the last 40 years teaching kindergarten,” Mr. Smith wrote of the actress, and the discussion of her appearance. Which makes me wonder whether he’s ever visited a playground. Or eavesdropped during back-to-school night. The truth, as any woman can tell you, is that there’s no place, no profession, nowhere that a woman’s looks don’t matter. Just go live a quiet, private life? Tell it to the women on the London Tube, who say, last month, they were handed cards by people claiming to be from a group called “Overweight Haters Ltd,” which read, in part, “it’s really not glandular, it’s your gluttony … you are a fat, ugly human.”

If that isn’t depressing enough, an unlikely voice has joined the fix-yourself-fatties chorus. Oprah Winfrey is all over your TV, your phone, your Instagram feed, urging women to join her on yet another weight-loss journey with Weight Watchers. “Inside every overweight woman is a woman she knows she can be,” Ms. Winfrey says in the minute-long ad for the company. “Many times you look in the mirror and you don’t even recognize your own self because you got lost, buried, in the weight that you carry.”

Seriously? Oprah Winfrey, with all her influence, all her accomplishments, the school she’s built and the money she’s earned, is still feeling lost, buried, or like she’s not her best and most authentic self? Shouldn’t Oprah, of all people, be open to the possibility that she already is the woman she’s meant to be? And when you’re 61, are you really, still, expected to be fretting over whether you’ve got your “best body”? Can’t you just page through your high school yearbook, eat the way your cardiologist says you should, and call it a day?

Maybe Oprah’s find-that-woman-inside-shtick is unvarnished honesty, or maybe it’s savvy salesmanship. In October, Ms. Winfrey became a part owner of Weight Watchers, investing $43.2 million to purchase a 10 percent stake in the company. She joined its board of directors, enrolled in the program and has been trumpeting her 15-pound loss. She has been less vocal about the paper profit of more than $70 million she made after her involvement was announced.

If she keeps that (15 lb) weight off, she’ll be a statistical outlier. On Weight Watchers, as with any diet, “you lose weight in the short run, and it comes back in the long run,” says Traci Mann, a professor of psychology at the University of Minnesota and the director of its health and eating lab. “Your body senses deprivation and launches all of these changes to make sure you don’t starve to death, to make sure you eat. And they are effective changes — you think about food more, you want food more, it looks tastier to you, you can’t get it out of your mind.” So you eat. And you regain the weight.

While her viewers have long seen Ms. Winfrey’s ups and downs — who can forget the wagon full of fat she schlepped onstage in 1988 after a liquid diet left her 67 pounds thinner — lately, she’s talked more about self-acceptance than she has harped on weight loss.

But just because Oprah’s back on the New Year/New You bandwagon doesn’t mean we have to follow. Each new year, women are encouraged to reduce — to measure out our lives in 55-minute barre classes and four-ounce servings of chicken breast, to adhere to the diet that we’re sure is going to work this time, even if none of the other diets worked any of the other times. Plastic surgeons run ads for injectable fillers, body contouring and laser skin resurfacing to stave off the inevitable.

But what if, instead of investing in paid diets and microdermabrasion, we donated our dollars to worthy charities and gave our time to the food pantry or elementary school? What if we thought about adding things to our lives — new foods, new skills, new classes, new walking routes — instead of taking things away?

“Lose weight and gain so much more,” invites Weight Watchers’ website. If you’re looking for a New Year’s slogan, here’s another one to try — in 2016, let’s look beyond the superficial and all resolve to make more of ourselves, not less.

The author of this article, Jennifer Weiner, is the #1 New York Times bestselling author of twelve books -, ....(some of her fictional novels are personal favorites of mine)....  Her books include: Good in Bed, In Her Shoes, which was made into a major motion picture, and Who Do You Love. She is a graduate of Princeton University and a contributor to the New York Times Opinion section.