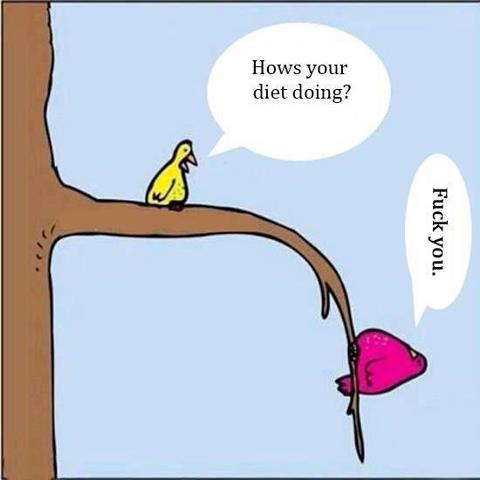 Sometimes vulgar and offensive language just feels appropriate. Right now I'm dealing with some unwelcome weight-gain - despite my best efforts, but am working to Accept the Reality of it, and to Focus on my Behavior rather than on my Results.

Articles such as this inspire me to understand and accept the situation, and give me strength to continue my ongoing maintenance struggle.

Fact #2 about obesity from the New England Journal of Medicine paper states simply that,

“Diets (i.e., reduced energy intake) very effectively reduce weight, but trying to go on a diet or recommending that someone go on a diet generally does not work well in the long-term.”

This statement needs to be read very carefully as it actually comprises of two facts: the first alludes to the fact that reducing energy intake effectively reduces weight (which it no doubt does); the second to the fact that simply being asked to or wanting to go on a diet seldom results in long-term weight loss.

As the authors point out,

“This seemingly obvious distinction is often missed, leading to erroneous conceptions regarding possible treatments for obesity; recognizing this distinction helps our understanding that energy reduction is the ultimate dietary intervention required and approaches such as eating more vegetables or eating breakfast daily are likely to help only if they are accompanied by an overall reduction in energy intake.”

What the authors do not state, but is increasingly obvious (and would certainly count as a “fact” in my books), is that complex hormonal, metabolic and neurochemical changes associated with weight gain result in powerful biological adaptations that serve to defend against weight loss and to promote weight regain.

It is these counter-regulatory alterations, which include persistent changes in neurohormonal activation of appetite as well as marked reductions in resting and activity related thermogenesis, that together orchestrate the biological response to weight loss explaining why the vast majority of individuals, who lose weight with lifestyle interventions alone, fail to keep it off.

Simply stated, the failure of most diets has little to do with lack of motivation or will power - it has everything to do with the fact that the body very effectively “defends” its body weight and will ultimately wear down all but the most compulsively obsessed dieters.

This is not being “negative” about the success of dieting - this is simply acknowledging the reality of our biology.  It is also the rational explanation for the fact that most diets (irrespective of whatever happens to be the current fat: low-fat, low-carb, high-protein, or anything else) fail for most people and why true long-term “success stories” are indeed remarkably rare.

It would certainly help if fact #2 found its way not just into obesity policies but also into the realisation that obesity, once established, requires treatments that have to go well beyond meaningless and ineffective “eat-less-move-more” mantras.