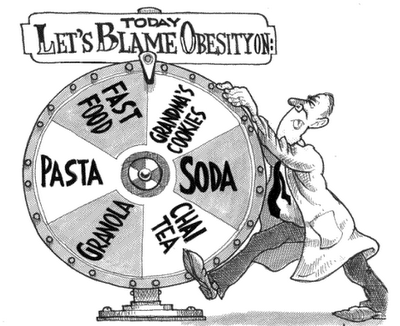 There are lots of reasons for Obesity, and Scientific Research--as reported by the media - continually spins the Wheel of Chance in order to pick one. The high-calorie-sugared-water commonly known as SODA would certainly be a contributing factor for those people who choose to drink lots of it.

Below is a sneak peak of an advertisement that Coca-Cola prepared to possibly air during the Superbowl showing us that they are helping us fight obesity.

In this ad, Coca-Cola indirectly admits that drinking a lot of sugared water might affect weight. However, it also attempts to reinforce the erroneous belief that you can "out train a bad diet", and it gives Coca-Cola ammunition against “unfriendly” legislation by suggesting that it is working hard to be “part of the solution”.

Coca-Cola wants to sell products.
As many as they possibly can.
That’s it.

It’s the way our society is built.

The aim of this advertisement is to do that.   Soda taxes or policies that restrict sales will be far worse for business than an ad like this which is designed to deceive the Public to make it believe that Coca-Cola is "part of the solution", and that we can "outrun" our glasses of sugar.