Should we be afraid for our health
because we're fat?

Or is the "Obesity Epidemic" a Myth,
and losing weight to get "healthy"
just another Anti-fat Biased Hype?

ACCORDING to the United States government, nearly 7 out of 10 American adults weigh too much. (In 2010, the Centers for Disease Control and Prevention categorized 74 percent of men and 65 percent of women as either overweight or obese.) 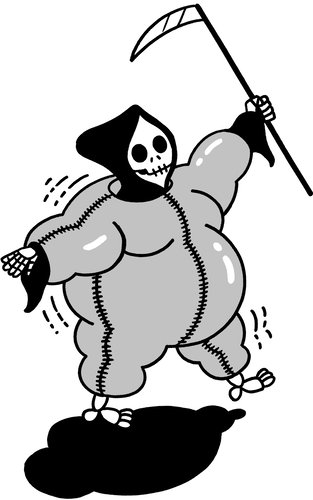 But a new meta-analysis of the relationship between weight and mortality risk, involving nearly three million subjects from more than a dozen countries, illustrates just how exaggerated and unscientific that claim is.

The meta-analysis, published this week in The Journal of the American Medical Association, reviewed data from nearly a hundred large epidemiological studies to determine the correlation between body mass and mortality risk. The results ought to stun anyone who assumes the definition of “normal” or “healthy” weight used by our public health authorities is actually supported by the medical literature.

Now, if we were to employ the logic of our public health authorities, who treat any correlation between weight and increased mortality risk as a good reason to encourage people to try to modify their weight, we ought to be telling the 75 million American adults currently occupying the government’s “healthy weight” category to put on some pounds, so they can move into the lower risk, higher-weight categories.

In reality, of course, it would be nonsensical to tell so-called normal-weight people to try to become heavier to lower their mortality risk. Such advice would ignore the fact that tiny variations in relative risk in observational studies provide no scientific basis for concluding either that those variations are causally related to the variable in question or that this risk would change if the variable were altered.

This is because observational studies merely record statistical correlations: we don’t know to what extent, if any, the slight decrease in mortality risk observed among people defined as overweight or moderately obese is caused by higher weight or by other factors. Similarly, we don’t know whether the small increase in mortality risk observed among very obese people is caused by their weight or by any number of other factors, including lower socioeconomic status, dieting and the weight cycling that accompanies it, social discrimination and stigma, or stress.

In other words, there is no reason to believe that the trivial variations in mortality risk observed across an enormous weight range actually have anything to do with weight or that intentional weight gain or loss would affect that risk in a predictable way.

How did we get into this absurd situation? That is a long and complex story. Over the past century, Americans have become increasingly obsessed with the supposed desirability of thinness, as thinness has become both a marker for upper-class status and a reflection of beauty ideals that bring a kind of privilege.

In addition, baselessly categorizing at least 130 million Americans — and hundreds of millions in the rest of the world — as people in need of “treatment” for their “condition” serves the economic interests of, among others, the multibillion-dollar weight-loss industry and large pharmaceutical companies, which have invested a great deal of money in winning the good will of those who will determine the regulatory fate of the next generation of diet drugs.

Anyone familiar with history will not be surprised to learn that “facts” have been enlisted before to confirm the legitimacy of a cultural obsession and to advance the economic interests of those who profit from that obsession.

Don’t expect those who have made their careers on fomenting panic to understand that our current definition of “normal weight” makes absolutely no sense.

Paul Campos is a professor of law at the University of Colorado, Boulder, and the author of “The Obesity Myth: Why America’s Obsession With Weight Is Hazardous to Your Health.” (2004)