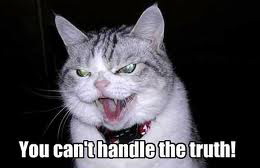 The truth is that a great many people don't want to hear the Truth.
They want to hear what makes them comfortable.

Due to the frequency and high-visability of advertising by Marketing Interests … which includes medical professionals, as well as the numerous books and programs involving diets and “anti-diets”…, people have come to expect to hear Magical Solutions to problems involving the issues of Food, Eating, and Obesity.

Very often, people don't want to be confronted, challenged or questioned, and they definitely don't want to have to change their Beliefs, Behaviours or Habits. It’s too uncomfortable and too inconvenient…. And too much work. Sometimes one can be fine with the truth just as long as it doesn't mean that one has to modify or interrupt one’s life in any significant way. 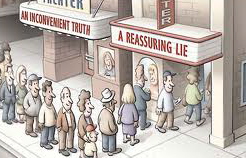 Instead of being open to learning some valuable truth, truth that could change one’s reality for the better, often many people can become defensive, critical and angry. Acknowledging certain things might mean that a person would have to change their belief system.

One might even have to give up some favorite Fantasies,
Such as their SOMEDAY achievment of:

One might have to accept that
... in order to achieve a body that is just somewhere around normal weight,...
a person will have to behave differently, and change their way of eating food ... FOREVER.
And behaving differently is not an easy thing for anyone to do, even when it’s only for a short time.