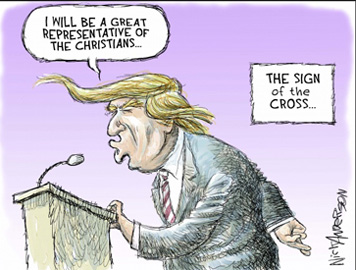 “It is not acceptable to ask a moral, dignified man to cast his vote to help elect an immoral man who is absent decency or dignity.

If the consequence of standing against Trump and for principles is indeed the election of Hillary Clinton, so be it. At least it is a moral, ethical choice.

If one helps to elect an immoral man to the highest office, then one is merely validating his immorality, lewdness, and depravity.”

The above is a recent quote by Conservative Political Commentator, Republican leader, and media personality, Glen Beck.  It also expresses my own personal feelings about Donald Trump and the 2016 election.

Most Democrats are, of course, anti-Trump and a great many of them are pro-Hillary.  However, at this point, at least one-quarter of the top elected Republicans will not endorse Trump for president, and more of them appear to be leaving his camp every day.

I’ve finally reached my Breaking Point.  Enough is Enough.   Although DietHobby is not intended to be a political platform, I find today that achieving success with my personal weight-loss maintenance requires me to express my thoughts on this subject.

Here is my bottom line.  I do not see how any woman, or especially any woman (or man) who is a Christian believer, could ever cast a vote for such an immoral, indecent, undignified man.   I am saddened and embarrassed to have Republican friends and family members who continue to openly support him, and I must admit that this does make me think less of them.  I find that I really feel I need to say this, and since those family members seldom if ever read the posts I make here at DietHobby,  I doubt that my statements here will offend them.

I have posted a few public articles on my personal “Phyllis Collins” Facebook pages showing some of my most outstanding objections to Trump, so I won’t attempt to duplicate that information here.  I feel very strongly about my objections to Trump, and I agree with those political experts who say that those people who fail to vote or who vote for a third party candidate are actually helping get Trump elected.  Therefore I will be voting for Hillary Clinton in the upcoming election, and I urge all of my friends, family, and acquaintances to do the same.

Thank you Carly Simon for your song in the video below.