Projections about the Rate of Weight-Loss 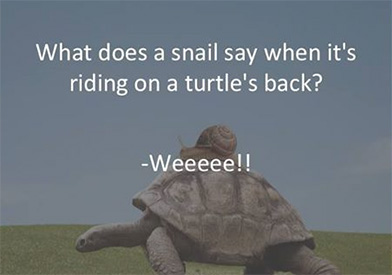 The issue of Projections about the Rate of Weight-Loss has been on my mind for a very long time, and so this article is going to be quite long and detailed.  Those who bear with me and press on through, might learn some helpful information, or at least be exposed to something other than empty promises.

The Diet Industry knows that people want to lose their excess fat ASAP, and that people also want to spend as little time possible on a weight-loss Diet.  It takes advantage of that fact by using the diet-of-the-moment’s maximum 1st week weight-loss number as a marketing tool.

Typical is: “Lose 15 pounds in 7 days”; or 10 pounds or 7 pounds, etc.  We see that ploy used continually in the media.  It is almost impossible to look at any magazine display rack in a supermarket checkout line without seeing a similar Headline.

What is implied by this claim is that the number of the first week’s weight loss is a prediction of weight-loss for the subsequent weeks. Marketing claims: “10 pounds in 1 week”.  People think, “Wow, If I stick to this Diet for just 5 weeks, I can lose 50 pounds.”

Then, when they don’t experience that rate of weight-loss, they feel disappointed. Upon expressing their disappointment to the medical doctor, the nutritionist, the diet guru, the group leader, the program counselor, or whoever, the most common response is: “YOU didn’t follow the diet correctly.”  People are blamed for their weight-loss failure; while the Diet Industry gets the credit for their weight-loss success.

This is universal. I’ve never seen or participated in ANY diet program that didn’t follow that line of thinking, and during the past 60 years …from adolescence on… I’ve been involved with a great many of them.  I have personal experience with a great many diets and diet programs, and I’ve closely watched the experiences of many hundreds of other people as they dieted.

Almost everyone on a Diet, including me, is curious about their own potential rate of weight-loss.

In addition to the facts mentioned above, different people of the same age and same size naturally have different metabolic rates. The two main formulas that cite Metabolic rates, and list weights and calories together, are the Harris-Benedict formula and the Mifflin formula.  These are similar in that their numbers are based on AVERAGES… which means that there are many people ABOVE that number, and many people BELOW that number. The standard deviation of the Harris-Benedict formula is about 14%, and it is not uncommon for people to be 14% above or 14% below that Average number.  Also, the studies include  “Outliers” which are people who are situated away or detached from the main body and differ from all other members of a particular group.  An Outlier has a metabolic rate very much higher or very much lower than the rest of the Group.

It is important to understand that the calculators, charts, graphs and predictions we see online are based on the Averages used in the above-mentioned formulas, and although they are a good place to start, they may not apply exactly to you personally.  AND, even if they apply to YOU personally, it doesn’t mean that they will apply to EVERYONE personally.

I’m going to show you how this works by sharing about ME, personally.  In order to better understand, it would be helpful if you read or re-read the article: ABOUT ME.  Next read or re-read the article: How Fast…How Much…Weight Lost After Gastric Bypass?  This article contains a detailed chart of my rate of weight-loss during the year immediately after my RNY gastric bypass 24 years ago.

The rate of weight-loss that I experienced during the year following weight loss surgery is extremely valuable information because there can be NO QUESTION of whether or not I was “faithful to the diet”.  I had no other physical option, as my body would not allow me to eat in any other way.  No normal “cheating” was possible, and even a very tiniest amount of extra food resulted in severe physical discomfort, i.e. vomiting and/or other painful symptoms.

It is also important, because my diet after a gastric bypass was an extremely low-calorie diet, from less than 300 daily calories to a maximum of around 600-800 daily.  So, ….other than a total water fast… no other diet exists which would cause a faster rate of weight loss for me.

Here is a summary of my numbers (see the chart mentioned above for details).
Start: 271 pounds; End: 161 pounds.

Information from the first 7 months or so is the most relevant for this article.

In the weeks that followed, my body was able to tolerate more food, and my weight loss began slowing to a standstill.  Although this information is not all that relevant to this current article, I include it to satisfy those who might be curious.

So, regarding projections about my own future rate of weight-loss, the  information about myself shows that in the 7 or so months immediately following a RNY gastric bypass, which forced me to eat in a very low-calorie manner …. my average rate of weight loss was about 2 ½ pounds per week.

I am still female, and still 5 ft 0 in tall,
however, at this time……
I am 24 years older. I am physically much less active. Instead of being obese between 254-180 pounds, I am now a “normal” weight - 123.  All of these factors make a difference in my metabolic rate. It is now lower. My body now, simply does not need as many calories as it did before.  Because of this, it is unlikely that any type of diet … other than a total water fast… would cause an ongoing weight loss as high as that previous 2 ½ pound weekly average.

There are very few people who have kept exact and detailed long-term records of their weight-loss histories, or had the same diet experiences. So while my information is relevant to me, personally, it might not be all that helpful to others. Keeping all of that past personal information in mind, now I’m going to move on to share about making personal projections for my FUTURE rate of weight-loss on a very-low calorie diet.

This is an visual of my current weight maintenance graph.

My ultimate goal is to keep my weight within my “normal” BMI range.  At times this involves some rather serious dieting.  Currently, I am doing some more experimentation with “The 5-Bite Diet”, which is a very low calorie diet which mimics the volume of eating immediately after a Gastric Bypass.  This morning the scale said that I weigh 123 pounds.

In the next examples, I’m going to be using the Body Weight Planner Tool.  For my detailed discussion of this tool, read or re-read Body Weight Calculator -Timeline Projections. Remember, the numbers in this tool are based on AVERAGES, and people are commonly both Above and Below these Averages.

Now, I’m going to use the Body Weight Planner Tool to run some calculations in order to see what a “reasonable” timeline projection of my rate of weight-loss would be if:

This following information is for those people who might be interested in learning how to use this Calculator to find out what a “reasonable” timeline projection might be for their own personal rate of weight-loss.  BTW, in order to force the tool to go under a 1, 000 calorie diet, you have to use the button “Switch to Expert Mode”. 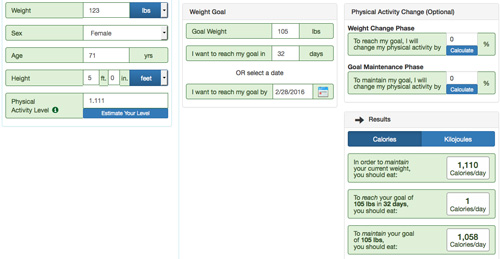 Scenario One….. A Total Water Fast.

In this example, I use my own numbers, to see how long it would take for me to lose from 123 pounds to a 105 pound goal on a total water fast.

Notice the graph gives my total daily energy equivalent (TDEE) as 1,110 daily calories.  It says that after I reach 105 pounds that TDEE will drop to 1058 daily calories. In actuality, from my detailed 10 year history of personal records, my actual TDEE is a couple of hundred calories lower than  Average.

According to this calculator, it would take 32 days of a total water fast for me to reach 105 pounds. 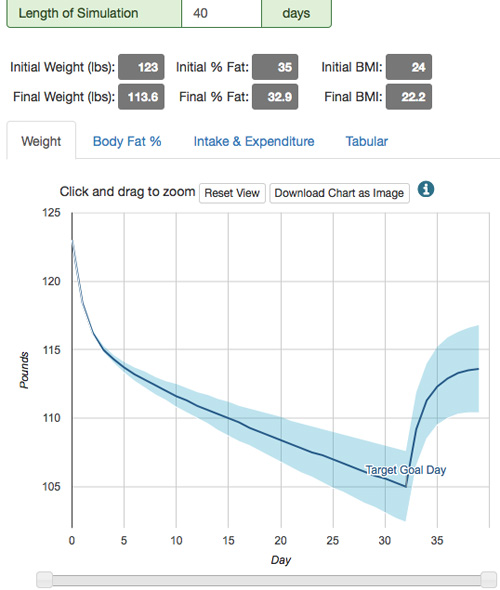 Above is a graph of that same information.  Note, however, that immediately upon reaching 105 pounds, and starting to eat 1058 calories, there is a projection of an immediate up bounce, due to the increased weight of food/water/salt/waste. This projected up bounce is almost 8 pounds, leaving the final weight result 113.6 pounds. 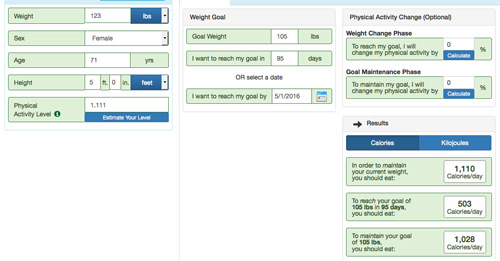 In this example, I use my own numbers, to see how long it would take for me to lose from 123 pounds to a 105 pound goal on a perfect 5-bite diet of 2 snickers bars or 500 calories per day.  All of these graphs will give me the same TDEE info. 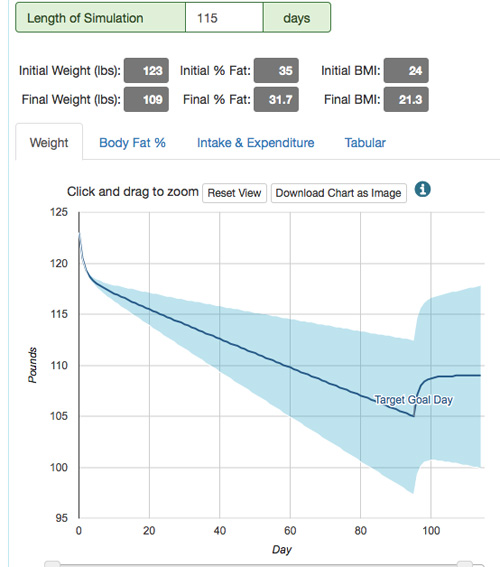 Above is a graph of that same information.  Note, however, that immediately upon reaching 105 pounds, and starting to eat 1058 calories, the projection of an immediate up bounce, due to the increased weight of food/water/salt/waste is less. This projected up bounce is about 4 pounds, leaving the final weight result 109 pounds. 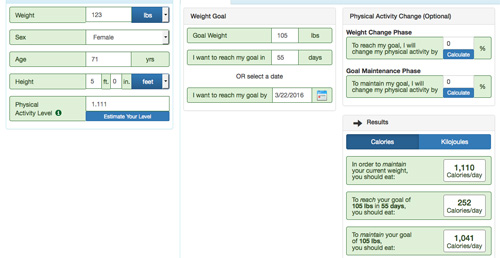 In this example, I use my own numbers, to see how long it would take for me to lose from 123 pounds to a 105 pound goal on a perfect 5-bite diet of 1 snickers bar (250 calories) per day.  All of these graphs will give me the same TDEE info. 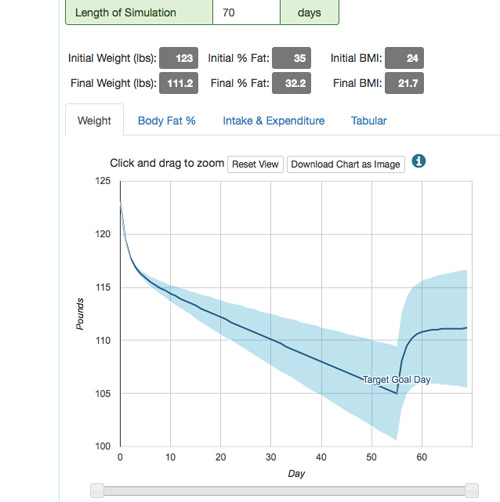 Above is a graph of that same information.  Note, however, that immediately upon reaching 105 pounds, and starting to eat 1058 calories, the projection of an immediate up bounce, due to the increased weight of food/water/salt/waste is less. This projected up bounce is about 6 pounds, leaving the final weight result 111 pounds.

What does all this mean?
First, undoubtedly, it it means that I am a compulsive record keeper, who is obsessed about my weight.

Second, the information in the above pictures does not apply universally. It is applicable ONLY to me personally…. and even then… only to the “average” person whose height, weight, sex, age, and activity level numbers match my own.

Next, the tool I’ve demonstrated can be used by anyone who wants to input their own numbers, and play the game of “how many calories = how fast a weight loss”.

Finally, my wish and hope is that everyone who is interested in their own rate of weight loss, will not simply take the amazingly erroneous weight-loss projections of any “Expert, including any Medical Doctor” as Truth, and then blame themselves for failing, when even despite their very best efforts, their bodies do not meet those impossible-and-unreal rapid-weight-loss standards.

NOTE:  Originally posted in January 2016. Bumped up for new viewers.