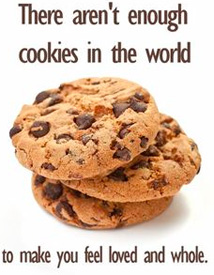 The following is author Michael Neill's perspective on Natural Eating:

Working from the perspective of the Inside out, rather than from the Outside In, here is the way we would all naturally eat if we hadn’t been taught to eat differently.

When your body is hungry eat.
Eat what you want, not what you think you should.
Eat consciously and enjoy every mouthful.
When you think your body’s hunger is satisfied, stop eating.

Think about it - but for our societal training in mealtimes and childhood training using food as both reward and punishment, why would you ever eat if you weren't hungry?

If it weren't for all the information and misinformation around us about what we're supposed to eat, why would you ever even put something in your mouth you didn't want to eat?

But for our multi-tasking on-the-go culture and the fact that most of us try to eat what we should instead of what we want, why wouldn't you take the time to enjoy every mouthful of the food you are eating?

And but for everything we've learned about the importance of cleaning our plates and fears about being hungry later because we're not supposed to eat between mealtimes, why would you ever keep eating past the point of full?

Speaking as someone who has played around with numerous outside-in eating programs over the years, ranging from Atkins on one side to Potatoes not Prozac at another, I know first hand the allure of the outside-in. Everyone has cool sounding success stories and shiny scientific data, along with pictures of people who we just know we'll look like when we've followed the program for as long as they have.

Worse still, most outside-in eating programs actually work - for as long as you follow them. So we ignore the overwhelming data suggesting that diets are the most successful weight-gain programs in history and assume it must be our fault - if only we were more disciplined, or hadn't been born with the fat gene, or whatever our best guess as to why we're the only ones who can't make something work that statistically doesn't work for over 95% of dieters, we'd lose weight and keep it off for life. 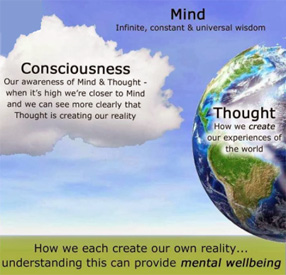 But as always, life lived from the inside-out is simpler than that. When we're looking in the direction of what's natural as opposed to what's normal, we see that all the reasons we would eat when we weren't hungry have one thing in common - they're made of Thought.

We think it would be rude not to eat what we're given and immoral to leave food on our plates. We think we know better than our bodies about what they need to function optimally, and because we are so out of touch with our bodies, we collect evidence to make these thoughts seem even more real and substantive.

What about so-called "emotional eating"? Well, since every emotion is a thought, the feelings of insecurity, discomfort, stress and fear we eat to mask are really just misguided attempts to hide from our own thinking. And as I've said elsewhere, "there aren't enough cookies in the world to make you feel loved and whole."

Your well-being is innate. Your value and worth in the world is a given. And when you begin to see the nature of Thought, you view your own thoughts with a degree of perspective and neutrality that allows you to see right through them.

You are OK right now, regardless of what you weigh. That doesn't mean that if you consistently eat when you're not hungry that you won't face health risks - over time, you most assuredly will. It just means being thin won't make you a better person.

"Do you want to live more or less in tune with your nature?"

Michael Niel is a "success coach" and author of several best selling books based on the 3 Principles. He has several informative YouTube videos, one of which is here in the DietHobby ARCHIVES in the article entitled:  Our Thoughts Create Our World.