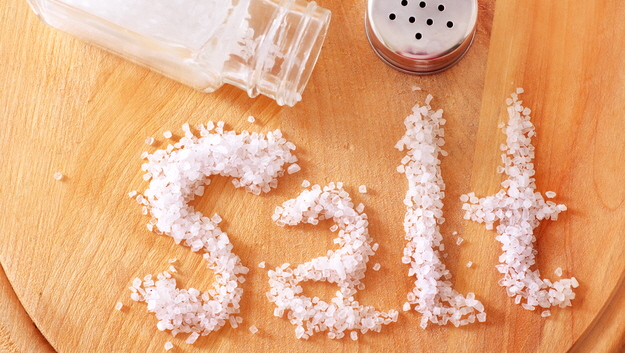 The idea that "salt is bad for you" is entrenched in the American mindset; sodium's right up there with trans fats and cigarettes. We now commonly see ads warning us of the high sodium content of processed foods.

I take the idea …"that a normally healthy person should restrict salt"… with a grain of salt.
i.e. to take a statement with 'a grain of salt' or 'a pinch of salt' means to maintain a degree of skepticism about its truth. The phrase has been in use in English since the 17th century;

In reality, the IDEA THAT SALT IS BAD FOR US IS NOT (and has never been) BASED ON SOLID EVIDENCE. Even worse, the idea is dangerously wrong: we need salt to live, and not eating enough can make a person die.

Salt does not cause our bodies to gain or lose fat.
Salt has no calories.

Our blood is 0.9% salt and it is continually flowing through our lymphatic system. Salt is also necessary for the production of hydrochloric acid, the digestive enzyme secreted by the stomach in order to digest protein. It’s important for nerves and muscles. When we sweat we can taste the salt coming out of our skin. Salt is vital for life’s existence. Put a salt block outside and all animals will consume it.

A diet low in salt can eventually lead to dehydration. Salt holds water in the body, and without it, people can actually dehydrate and die even while drinking water. 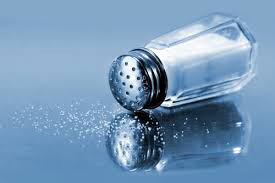 The anti-salt campaign began in the 70s, based on two pieces of flimsy research. Although researchers quietly acknowledged that the data were 'inconclusive and contradictory' or 'inconsistent and contradictory'... publicly, the link between salt and blood pressure was upgraded from hypothesis to fact, probably because there was no other good suspect at the time to blame for hypertension.

After studying new research conducted since 2005, a committee commissioned by the Institute of Medicine and CDC issued a report that "said there was no rationale for anyone to aim for sodium levels below 2,300 milligrams a day" .

One study found that among people with moderate to severe heart failure, those who consumed less salt were more than three times more likely to be readmitted to the hospital; another found that older folks with high blood pressure consuming less than 3,000 mg of sodium a day were as likely to suffer heart problems and strokes as those eating more than 7,000 mg a day. The average, across cultures and generations, is around 3,700 mg, suggesting this is probably around a naturally healthy range.

Despite this evidence, the American Heart Association has not amended its low-sodium recommendations.

Here’s an recent article by a medical professional about this subject.

Unbeknownst to many readers, the first 10 years of my research career was built largely on studying the effects of salt (or rather sodium chloride) on blood pressure.

In over 40 peer-reviewed publications, we described in excruciating detail the physiological effects of increasing and decreasing sodium intake, in many cases using single-blind randomised trial designs in hundreds of volunteers.

We not only examined the effects of salt on blood pressure but also on a wide range of physiological, metabolic and psychological parameters. We studied the effects on acid-base balance, we conducted genetic studies, we even performed in vitro studies on cells cultured from “salt-sensitive” and “salt-resistant” individuals.

In many respects, these studies left me as confused about the role of sodium on these parameters as I was before. Not that we did not report findings that helped us better understand the complex physiology of sodium homeostasis – it is just that we failed to convincingly demonstrate any major health implications of these findings.

In some cases we even reported adverse consequences of sodium restriction resulting both in significant elevations in plasma lipids and insulin resistance (perhaps not surprising given that reducing sodium intake markedly stimulates both the sympathetic and renin-angiotensin systems – the very systems we seek to block to reduce cardiovascular risk).

That was almost 20 years ago – the field does not appear to be much clearer today.

Thus, although surprising to some, I must admit that I was by no means surprised by the report on sodium released last week by the Institute of Medicine, with the rather revealing conclusion that,

“…the evidence from studies on direct health outcomes was insufficient and inconsistent regarding an association between sodium intake below 2,300 mg per day and benefit or risk of CVD outcomes (including stroke and CVD mortality) or all-cause mortality in the general U.S. population.” (or any other population for that matter)

This is not to deny that despite considerable methodological problems (not least in the actual measurement of salt intake), there is evidence to support the idea that higher salt intake may affect blood pressure and possibly cardiovascular risk. However, the data is certainly far less conclusive than food bloggers and health activists would lead us to be believe.

Not surprisingly, the same activists and organizations are now up in arms stopping just short of criticizing the scientific credibility of the IOM expert committee – no doubt, the same folks would have been applauding the conclusions of this “illustrious panel”, had the findings been more in line with their own activist agendas.

What is perhaps even more infuriating to those who have always considered the issue of sodium recommendations a slam-dunk case is the statement by the IOM that, there is in fact no basis on which to draw recommendations for the general public in recognition of the fact that significant proportions of the population may require higher sodium intakes and may even be likely to suffer harm from overly enthusiastic sodium restriction.

While I have no illusions that this report will in any way put the century old debate to rest (indeed the report calls for further research), I think that there is a much bigger message in this report that should let us tread cautiously when it comes to dietary recommendations in general.

Let us remember that associations (on which so many of our assumptions about healthy diets depend) simply do not prove causality, even when backed by seemingly plausible biological hypotheses derived largely from rodent toxicology.

We should also remember that fancy statistical predictions on the vast number of lives lost or saved by altering the population intake of this or the other nutrient, are generally based on sometimes rather heroic assumptions that may well explain whey they are rarely (if ever) borne out by actual interventions.

Thus, whether we are talking about salt, fat, carbs, sugar, fiber, gluten, calcium, Vit D, dairy or red-meat, a degree of humility in advocating for policies and other measures to reduce or increase this or the other is generally in order.

Seldom in the field of nutrition are things as cut and dried as some will have us believe – if only food were as simple as tobacco.