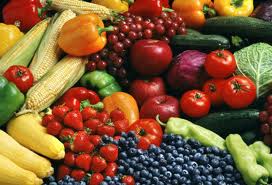 Yesterday, my article was about the

Difference between Correlation and Causation.

Below are two examples of media
handling the same recent health research study.

"People who eat seven servings of fruit and vegetables a day have the highest levels of happiness and mental health, according to a new study.

In a joint effort with Dartmouth University, researchers at the University of Warwick examined the eating habits of 80,000 people in England and found that mental well-being rose with the number of daily servings of fruits and vegetables, peaking at seven servings a day.

The study, which appears in the journal Social Indicators Research, defied a serving as about 80 grams (2.8 ounces).

"The statistical power of fruit and vegetables was a surprise. Diet has traditionally been ignored by well-being researchers," study co-author Sarah Stewart-Brown, a professor of public health, said in a university news release.

Further research is needed to learn more about the reasons behind the findings, she added.

"This study has shown surprising results, and I have decided it is prudent to eat more fruit and vegetables. I am keen to stay cheery," study co-author Andrew Oswald, a professor in the economics department, said in the news release.

Currently, many Western governments recommend that people eat five servings of fruit and vegetables a day to protect against heart disease and cancer, the release noted.

While the study found an association between fruit and vegetable servings and well-being, it did not prove a cause-and-effect relationship."

Here’s another take on the same Research.

"On the psychological side of dietary recommendations

PROBLEM: We go on about eating for health, but we're usually talking about the physical side. The World Health Organization recommends five servings of fruits and vegetables a day for your body, but not much is known about how much is best for psychological well-being.

METHODOLOGY: Economists and public health researchers from the University of Warwick, in conjunction with Dartmouth College, used data from several randomized, cross-sectional surveys that accounted for the eating habits of about 80,000 people living in the U.K. The fruits and vegetables typically consumed by each person were compared with their life satisfaction, mental well-being, presence of mental disorders, self-reported health, happiness, nervousness, and how often they "feel low."

They factored in as many variables as they could think of, including other the rest of their diets, alcohol, and lots of demographic, social and economic factors.

RESULTS: A "remarkably robust" pattern was found, in which "happiness and mental health rise in an approximately dose-response way with the number of daily portions of fruit and vegetables." While in some cases it rounds out at the recommended five per day, well-being appears to peak at seven.

In many cases, the improvements associated with fruit and vegetable consumption were substantial. For example, the authors explain that "When comparing small and large levels of fruit and vegetable consumption per day, the effect corresponds to between 0.25 and 0.33 life-satisfaction points. To put that in perspective, the known (huge) effect of being unemployed corresponds to a loss of 0.90 of a life-satisfaction point."

CONCLUSION: The findings are "consistent with the need for high levels of fruit-and-vegetable consumption for mental health and not merely for physical health."

IMPLICATIONS: This isn't a definitive randomized trial, but it's an interesting correlation that warrants more research. Economist Andrew Oswald in the Department of Economics at the University of Warwick seems pretty convinced, though. As he put it, "This study has shown surprising results and I have decided it is prudent to eat more fruit and vegetables. I am keen to stay cheery."

The full study, "Is Psychological Well-being Linked to the Consumption of Fruit and Vegetables?" will be published in the journal Social Indicators Research. "

At the end, both of these articles specifically admit that this study involves only a correlation, not causation.

However, do you join me in thinking that a typical reader of these articles will come away believing that new research says that they would probably be happier if they ate more fruits and veggies? And… that one of the reasons they now feel unhappy, could be because they don’t eat ENOUGH fruits and vegetables?