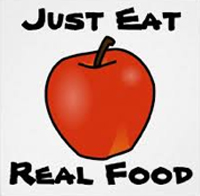 The article below says
something that really needed saying.

“Real food” is a term I dislike almost as much as “real women,” and for many of the same reasons.

On occasion, I run into this idea coupled with the concept of intuitive eating. People will proclaim how much they believe in permission and fulfilling your hunger and eating whatever you want (so far, so good)…but with one small caveat (uh-oh.) Permission and eating as much as you’re hungry for and eating what you like are, apparently, only legitimate if the food being eaten meets some mysterious criteria that imbues it with that holiest of all holy contemporary food values, the coveted title of “real food.”

For some people, real food means “food I make entirely at home from scratch [for varying values of 'from scratch.']” For some, it means “mainly plant-based foods with a smattering of dairy and animal protein.” For others, it means “entirely raw foods that have not been cooked.” And for yet others, it might mean anything from “a vegetarian diet” to “mostly meat and certain vegetables and no grains” to “a vegan diet composed entirely of homemade food” to “I grow everything I eat on my own land, including grains which I mill into flour myself and then deep-fry unrepentantly.”

There is a lot of wiggle-room in this term.

Before I go further, it is important for me to make it crystal clear that for people who choose to eat in one of these ways, I say good for you. I sincerely hope you enjoy it and feel great. Rock on. I am all for people making very personal choices about what foods they eat and don’t eat. I think the above are all decent options, but most importantly, it doesn’t matter what I think, because your body belongs to you. Personal autonomy around food is the driving force behind this entire website.

The problem is that I’ve met very few people who make personal choices of the “real food” persuasion without also pressuring those around them…without also proclaiming that the foods most people rely on to survive are inherently inferior…without also implying that the reason the rest of us are fat, or poor, or don’t have shiny hair, or don’t walk around perpetually bathed in magical sunbeams of happiness, is entirely because we eat the terrible, horrible, no-good, very bad food — the food that is not Real.

(To those who can make such choices without also being rude about other people’s food choice, I give my unalloyed thanks.)

That large caveat disposed of, I will now proceed to my central argument, which is this:

No, this does not mean that all foods are nutritionally equivalent, or that all foods are good for all people in all situations, but it does mean that choices around food must be individual, that all food choices can be valid, depending on the person and the circumstances, and that universal pronouncements on a food’s relative realness are not helpful or, well…real.

“Real food” is not a real thing. Because what constitutes food is too many things.

There is no One True Way to Eat. Most people tend to accept this as a generality, and express mild agreement through such aphorisms as “Do what works for you,” “Your mileage may vary,” etc. But I’m afraid general, mild agreement with the idea that different people are different does not quite do justice to the reality. Thankfully, I can provide you with a little glimpse into that reality.

The reality is, even foods we tend to recognize as universally wholesome and healthy are not actually appropriate for everyone. Bodies differ and circumstances also differ. For example, our universally beloved super food, kale (or leafy greens other than kale), is considered a food to avoid (along with a bunch of other “healthy” foods like whole grains, legumes, and many fruits and vegetables) for people with kidney disease who require a low potassium diet.

Eating more sodium instead of less sodium can actually be a critical thing for people who experience hypotension — when I was working in the hospital, we actually had to stop purchasing a popular brand of bouillon for this purpose when they lowered the sodium in their product in an attempt to provide a healthier option to consumers. Well, it wasn’t healthier for our patients on tube feeds, some of whom required a sodium boost between feedings — in fact it was quite dangerous.

And while you may be tempted to write off hospitalized patients as the exception to the rule, they are consumers too, and there are far more people with serious medical conditions in the world than our culture allows us to be aware of.

Some of them are kept out of sight and out of mind in hospitals (except to those of us who work there), but many more are living their lives and buying their food right alongside us. I wish we could all be a little more aware of that, and I wish food companies and public health nutrition education campaigns alike would take these very real and present needs into account, rather than continually and exclusively prioritizing the speculative health needs of the generally well.

Right this minute, there is someone going through chemotherapy shopping at your grocery store, buying popsicles and ice cream to help their sore mouth, and worrying what the cashier is going to think.

There is someone on hemodialysis buying white bread instead of whole wheat, trying to keep their phosphorus levels reasonable between appointments and hoping for the best.

There is a person attending intensive outpatient treatment for their eating disorder who has been challenged by their therapist to buy a Frappuccino.

There are dietitians picking up a dozen different candy bars to eat with their clients, who feel ashamed and guilty about enjoying them.

There is someone who just doesn’t have it in them to cook right now, and this frozen pizza and canned soup will keep them going.

There are people recovering from chronic dieting and semi-starvation who are buying chocolate and chips at their deprived body’s insistence.

All around us are people listening to what their bodies need and attempting to make the best possible choice within a context of overwhelming food pressure. All of their choices are valid, and every single one of these foods is “real.”

It is not a coincidence that the foods popularly imbued with “realness” map so cleanly onto class-related ideas of healthy, high-status food. Yes, they may be nourishing and wonderful, but these foods also tend to require more resources to acquire or prepare.

Those resources might be financial, in the case of going out to eat at a splendid restaurant, or they might be temporal and energetic, in the case of high-quality raw ingredients that require careful shopping, preparation, and cooking. They might even be educational, in the case of culturally novel foods requiring that you learn of their existence in the first place, and then have the knowledge and skill to render them into something edible to you. Resources can also be emotional and psychological, in the form of having a good relationship with food and being lucky enough not to feel either overly compliant with, or stubbornly rebellious against, cultural messages telling you what and how to eat.

None of it comes cheap.

It is wonderful if you have these resources and inclinations, and if the resulting food choices work well with your unique needs, but it is also lucky. Which means you should appreciate your good fortune enough not to go around spoiling other people’s food choices by insinuating that only yours are real.

If food is keeping someone, somewhere alive, then it is real enough.