You Can't Outrun Your Fork 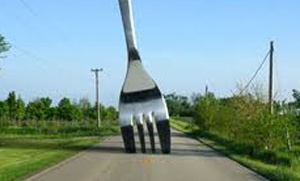 We need to unhitch exercise from weight-management.

Exercise is great for health,
but weight-loss comes from the kitchen.

Among the most commonly held misconceptions about obesity, perhaps none does more harm than the notion that exercise is responsible for the lion's share of weight management.

Sure, it's true that exercise does burn calories, and yes, if you burn more calories you ought to lose weight. But unfortunately, it's just not that simple.

To put exercise into some perspective, to lose a pound of weight each week would require roughly a marathon of effort each and every week, as the calories burned running those 26.2 miles would likely be in the neighborhood of a pound's worth. Of course, it would also necessitate that not once did you "eat because you exercised" – neither as an indulgence to reward yourself for all that running, nor as a consequence to any running-induced hunger. Seems to me that'd be pretty unlikely.

Looking at real-world studies of exercise and its impact on weight, the results are underwhelming to say the least. Take this 2007 study published in the journal Obesity. Researchers instructed 196 men and women to exercise an hour a day, six days a week, for a year! And researchers weren't just telling people to exercise, they were supervising them and instructing them as well.

Compliance was incredible – only seven study dropouts – and over the course of the year, men averaged 6.16 hours of weekly exercise, and women, 4.9 hours. So did the 320 hours of exercise for the men and the 254 hours for the women lead to weight loss? Yes, but probably less than you might have guessed. Men lost, on average, 3.5 pounds, and women, 2.6. That translates to 91.5 hours of exercise per pound lost.

Now, to be very clear, there is likely nothing better for your health than exercise – truly nothing. There's no pill you can take and no food you can include or avoid that will give you the health benefits of regular exercise. I exercise regularly, and I strongly encourage all of my patients to do so as well. But I also tell them that they can't outrun their forks.

The notion that moving more will translate to weight loss is a dangerous one. For individuals, it may effectively discourage exercise when results aren't seen on scales. For the media and entertainment industries, it often leads to the perpetuation of the "people-with-obesity-are-just-lazy" stereotype. For the food industry, it allows an embrace of exercise by means of sponsorship and marketing, which, in turn, helps companies deflect product blame and forestall industry-unfriendly legislation.

And for public policy makers, it makes it challenging to make the case for interventions that increase exercise, as inevitably the outcome hoped for is weight loss, and when outcomes are poor, it becomes more difficult to make the case that the intervention is worthwhile (like P.E. or more recess time in schools, for instance).

We need to unhitch exercise from our weight-management wagons. Breaking it down, figure that your diet is responsible for 80 percent of your weight and fitness – unless you're incredibly active, just 20 percent. If WEIGHT's your concern you're much more likely to lose it in your kitchen than you are in your gym. But don't forget, if it's Health you're after, you need to do both.

Whoever said life was fair?


Yoni Freedhoff, MD, is an assistant professor of family medicine at the University of Ottawa, where he's the founder and medical director of the Bariatric Medical Institute—dedicated to non-surgical weight management since 2004. Dr. Freedhoff posts on  www. Weighty Matters.