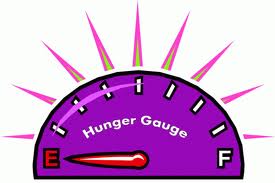 Recently I ran across a series of three articles about the basic Intutive Eating Concepts by UK addiction counselor, Gillain Riley, who appears to share my point of view about the general ineffectiveness of this Diet. Ms. Riley states her professional knowledge about these concepts in a thoughtful and precise manner, and I am sharing this series here at DietHobby.

Advocates of Intutitive Eating insist that this diet / manner-of-eating / way-of-eating / lifestyle is "not a diet". My belief is that every diet works for someone, and this includes Intutive Eating.

The first of the three articles can be found at: "Does Our Body Tell Us WHAT to eat - Intutive Eating 1"

Are You Hungry?
by Gillian Riley, Author of Ditching Diets (Revised edition of Eating Less)

The assumption behind this advice is that hunger means you are depleted of energy or nutrients, and therefore in need of food. But it's considerably more complicated than that. For example, when people fast or follow extremely low calorie diets, their hunger doesn't become increasingly more intense as time goes on and nutrient stores dwindle. Any anorexic will tell you that after a short time without food, their hunger fades away. If hunger accurately reflected nutritional status, this wouldn't happen. The reverse would happen, and hunger would intensify day by day.

To make the same point in a different way, if hunger expresses genuine nutritional need, it would begin to subside after the first few mouthfuls of a meal. But this doesn't necessarily happen either, and most people have at least some experience of the reverse occurring. Many people can begin a meal not feeling especially hungry, and then, after just a few bites of tasty food, feel a strong sense of hunger suddenly arrive. It doesn't make sense that your body would signal depletion after those bites but not before. (1)

We often think of those first few bites as a way to stimulate hunger, to awaken it. After all, the whole point of the 'starter' course is supposed to be to awaken our appetite and get our 'gastric juices flowing'. But how can we rely on this hunger signal if it needs to be stimulated to appear in the first place?

Rather than a signal of nutritional need, hunger is, to a great extent, a response to cues, at least some of which will be learned. The cue prompts an expectation of eating, and it's this expectation that sets off all those hungry sensations in our stomach. The cue could be the time of day, or the sudden availability of food along with the sights and smells of its arrival. There may well be no problem at all in responding to this by eating.

The problem arises for those who have overeaten so much that the cues triggering feelings of hunger happen much too frequently. It's okay for the expectation of eating to produce a sensation of hunger, unless you expect to eat every 15 minutes or so. Trying to follow the advice to eat when hungry isn't helpful if you feel hungry all the time.

Then there are those who tend not to feel hungry, even though it would be a very good idea for them to eat something. I've had a number of clients attend my seminars who have told me similar stories when they previously participated in a seminar promoting Intuitive Eating. They complete the seminar, quite excited by the prospect of looking out for hunger signals before eating. They go past breakfast time and don't feel hungry. They don't feel hungry at lunchtime, so they don't eat anything then either. Then, by the end of the afternoon, they feel weak, faint, irritable and shaky. They can't concentrate on their work and there's no food available except chocolate and sweets.

One factor here could be stress, which can have the effect of blocking hunger signals. When an animal is genuinely stressed, perhaps because they are about to be attacked, the last thing they are going want to do is eat. Part of the automatic stress response is to direct blood to the limbs in order to fight or take flight. The digestive system shuts down until it's needed again when the animal is safe and the stress has subsided.

Our present day human stress, though, is usually a more chronic state. Stress builds throughout the day and many people, not feeling hungry, go for many hours without eating. Typically they eat something when they get home and then overeat throughout the evening, probably on food that is not the most nourishing.

A paper published in the medical journal Physiology and Behavior proposes a phenomenon called 'hedonic hunger', which is hunger specifically for the more desirable (but less nourishing) kinds of food. (2) 'Hedonic hunger' is one manifestation of what I call the 'addictive desire to eat'. For example, if you feel hungry for toast and jam while completely uninterested in cucumber, you've probably got some hedonic hunger (addictive appetite or desire). The crucial point is that it feels like hunger, so it's very easy to assume you have an entirely appropriate need of food.

Again, it helps us to take into consideration the food environment in which our bodies evolved. A paper from the Journal of the American Dietetic Association makes this point: "...there is no clear adaptive advantage for an organism to consume just enough food to maintain energy balance. Such a system would fail to protect against future gaps in food availability. A strong hunger drive would act to encourage overconsumption and promote energy storage for use during intermittent food shortages." (3)

The question remains, if we have such an unreliable experience of hunger, why is Intuitive Eating so widely recommended?

The reason is that Intuitive Eating is presented as an alternative to prohibitive thinking (restrictive eating). It's well known - both in research and in many people's everyday experience - that it is counter-productive to think prohibitively about food. Trying to follow rules to restrict and deny yourself may work initially but creates stress, a miserable sense of deprivation and eventually a rebellious return to overeating. So the idea is to replace prohibitions around food with Intuitive Eating; to wait, for example, until you are hungry before you eat.

But these two ideas are not mutually exclusive. There are plenty of people who will think prohibitively in order to prevent themselves from eating before they're hungry. 'I mustn't eat if I'm not hungry' is just another rule to obey - or not!

The alternative I teach is neither of these alternatives. I do encourage people not to think prohibitively because it certainly is destructive. And it's fine if you are hungry when you eat, so by all means make your best guess as to when you think you'll need food again. But the way that's done, I believe, is through intellectual evaluation. We can quite simply develop a fairly good idea of what, how much and how often to eat, put together by our grasp of our nutritional needs, our schedule and the availability of nutritious food throughout our day.

Of course you also need to be able to manoeuvre yourself around the addictive appetite you may well have for all that food you don't need. But don't trust your body to tell you what's addictive and what isn't. If your pattern of eating isn't producing weight loss (assuming you are overweight) it's likely that eating even less will deliver the result you're after.

Here's a link to my book review of Ditching Diets (2013) by Gillian Riley.