Attitude About the Problem 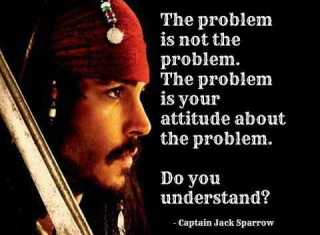 As part of my dieting hobby, I visit many different websites here on the internet,
and sometimes I post comments on different forums and other blogs.
Today, I've decided to post a copy of some dialogue from one of these forums,
consisting of another member's unusual comments, and my responses to them.

This member and I have been corresponding for more than 4 years, and we have developed a rather close relationship. She is an educated person who is quite religious. Although her desire and efforts for weight-loss have been ongoing, she has been consistently unwilling to work toward exercising conscious control over the amounts of food that she eats, and has been unsuccessful with her dieting attempts throughout that time period.

Quote from a forum member::

I challenge this offensive, incorrect, and illogical statement.

Just because we dislike something doesn't mean we get to redefine it.

Portion Control is simply using the brain that God has given you,
to work toward eating the correct amount of food for the body he has given you.
Portion Control simply means = eating less food.
How Much Less? That depends on WHAT you are choosing to eat.
The goal is to take in the same amount of energy as your body, at it's healthiest, uses.

If we are talking in terms of Good vs. Evil,
Portion Control must be Good,
BECAUSE
it is the opposite of the "evil" behavior: "Gluttony",
which Christianity (and many other Religions) define as sinful, bad, "evil".
If Gluttony equals bad; then Portion Control equals good.
Therefore, Portion Control is Godly Behavior.

Avoiding obesity requires limiting your food intake...
no matter what method you use to do this will always involve some form of portion control.
The concept of "free will" means that we can choose NOT to use our brain
to help us eat less food,
However, an attempt to redefine "good" as "evil" is Foolishness.

Quote from a forum member:

Gluttony used to mean eating before the time to eat,
according to a book on medieval eating that I bought.
Webster's online dictionary now says "an excess in eating or drinking."

Why, then, would there be a Shrove Tuesday or a Twelve Days of Christmas
when people were expected to and encouraged to eat more than they required?

I think our society may have changed the meaning of the word, with disasterous results.

Think about this:
What if portion control really is a new concept
and really is the cause of the obesity epidemic?

The term "Portion Control" is merely a modern term for an ancient concept.
The term is commonly used to indicate "eating less".

I, personally, choose not to think of eating in terms of “good” and “evil”.
However, in support of my above-post, it is easy to see
that the definition of Gluttony has been fairly consistent for thousands of years.

Regarding the past definition of “Gluttony”, even a brief review of the Bible
makes it clear that in ancient, biblical times, “gluttony” meant overeating to excess,
and a “glutton” was often equated with a “drunkard …
which shows that they were considered to be similar behaviors.

The English word, "Gluttony", was derived from the Latin gluttire meaning to gulp down or swallow,
It means over-indulgence and over-consumption of food, drink, or wealth items
to the point of extravagance or waste.

In some Christian denominations, Gluttony is considered one of the seven deadly sins
and it is specifically defined as - a misplaced desire of food…
... eating more than needed, eating more than one’s share.

The word "Greed" is defined as a selfish and excessive desire
for more of something (like food or money) than is needed,
A "Glutton" is "Greedy", and both of these words are often used to define similar behavior.

Deuteronomy 21:20 says:
”And they shall say unto the elders of his city,
This our son is stubborn and rebellious, he will not obey our voice;
he is a glutton, and a drunkard.”

Proverbs 23:20-21 warns,
“Do not join those who drink too much wine or gorge themselves on meat,
for drunkards and gluttons become poor, and drowsiness clothes them in rags.”

Proverbs 28:7 declares,
“He who keeps the law is a discerning son,
but a companion of gluttons disgraces his father.”

Proverbs 23:2 proclaims,
“Put a knife to your throat if you are given to gluttony.”

Biblical New Testament Scripture tells Christian believers
that they are not to let their appetites control them,
but they are to have control over their appetites.
(See Deuteronomy 21:20, Proverbs 23:2, 2 Peter 1:5-7,
2 Timothy 3:1-9, and 2 Corinthians 10:5.)

The ability to say “no” to anything in excess—self-control—
- is one of the fruits of the Spirit common to all believers
(Galatians 5:22).

It seems clear that IF one chooses to think of eating in terms of “good” and “evil”,
that eating less = i.e. portion control is “good”, and overeating is “evil”.

The establishment of various historical customs which appear to encourage overeating, don't change the definition of Gluttony.