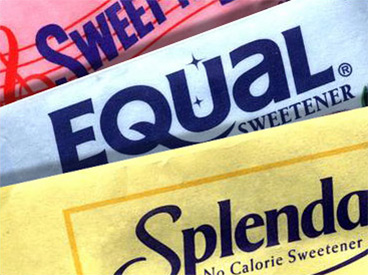 Interesting article by
Dr. Arya Sharma, M.D.
who blogs at
"Dr. Sharma's Obesity Notes",
and
who is a Source that I respect.

"Yesterday, I posted about the interesting study by Madjd and colleagues suggesting that drinking water may be better for weight loss than drinking diet beverages.

But what exactly is the evidence that low-calorie sweeteners (of which there are many) may actually have non-caloric effects on energy intake or body weight?

This is the topic of a systematic review by Peter Rogers and other members of the European International Life Sciences Institute published in the International Journal of Obesity.

The authors assessed both animal and human studies involving the consumption of low-calorie sweeteners in conjunction with an ad libitum diet.

In humans, 12 prospective cohort studies found inconsistent associations between the use of low-energy sweeteners and body mass index, with overall minimal effects at best.

A meta-analysis of short-term randomized controlled trials (involving 129 comparisons) showed reduced total energy intake for low-calorie sweetener versus sugar-sweetened food or beverage consumption before an ad libitum meal (about −94 kcal per day), with no difference versus water (−2 kcal per day).

These findings were consistent with energy intake observations in sustained intervention randomized controlled trials (10 comparisons), a meta-analysis of which (with study durations ranging from 4 weeks to 40 months) showed that consumption of low-calorie sweeteners versus sugar led to relatively reduced body weight (nine comparisons), and a similar relative reduction in body weight compared to water (three comparisons).

Thus, contrary to what is often stated in popular media or even by some experts, there is little if any evidence either from animal or human studies that the use low-caloric sweeteners has any measurable impact on energy intake (other than reducing total caloric intake) or body weight.

Thus, the authors conclude that

“Overall, the balance of evidence indicates that use of low-energy sweeteners in place of sugar, in children and adults, leads to reduced energy intake and body weight, and possibly also when compared with water.”

Obviously, even this analysis is not going to silence the sceptics, who will continue to claim that somehow low-calorie sweeteners are still messing up your energy intake or metabolism.

However, it may be fair to conclude that if indeed such effects exist, their magnitude is likely marginally and of doubtful clinical significance.

I will continue recommending that my patients do their best to replace sugar with non-caloric sweeteners if giving up their liking for sweet foods or beverages is not an option."