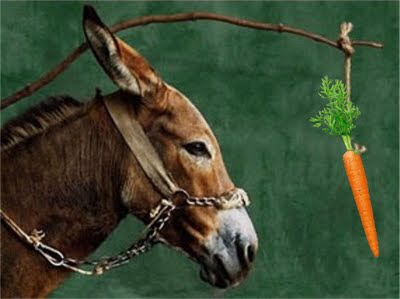 Here is the Carrot used in Intermittent fasting.

“Just get through today, and tomorrow you can eat what you want.”

Unfortunately it isn’t the truth … unless what you WANT tomorrow is merely what a naturally thin person consistently eats in order to maintain a normal weight.

Successful self-discipline requires plenty of carrot as well as stick.
The stick without the carrot can be used for punishment, but as a reward that stick is ineffective.

Success with intermittent fasting ... (or even with other diets involving intermittment times of calorie restriction – such as: restricted weekdays with unrestricted weekends) ... requires the low-calorie eating days to be balanced together with days of eating at maintenance calorie level … in other words, the restrictive days need to occur alongside the kind of “healthy” moderate diet that is followed by the naturally thin.

This requirement actually makes intermittent fasting more challenging than many other diets, and, for all but the most dedicated, even more unappealing and more impossible to follow.

If I WANTED only “normal” amounts of “healthy foods”, being fat would never have been a problem for me, and a Binge/Fast eating pattern rarely proves to be an effective weight-loss strategy.

The promise of days of unlimited, unrestricted eating is what lures one to the diet, but for most people this is really only a stick with the false promise of a carrot. Here’s a statement by one of the people who have found Intermittent Fasting a personal success:

“What I found was that my appetite gradually changed as I adapted to fasting and I no longer needed to binge-eat on up days. I wasn't a saint exactly but I was more restrained and weight-loss was steady and noticeable.”

People who succeed at non-fasting, but still intermittently restricted diets, such as the No S Diet, ..(which has restricted eating for 5 days, and unrestricted eating for 2 days)...  make similar claims. They indicate that after time, maybe 3 months, 6 months, 1 year, 2 years, etc… their weekday restrained eating habits bleed over onto weekends, and they no longer wish to overeat even though the diet “allows” them to do so.

Allegedly … eventually, …. the fat person’s body and appetitive will adapt, and the formerly fat person will naturally choose to eat in a way that will maintain a “normal” person’s weight.

Yeah … and for those fat people who rely on that promise, I’ve got a bridge to sell you in Brooklyn. While this might hold true for some overweight or even some borderline obese people who are not that far away from “normal” weight, there is a great deal of evidence that this is an illusionary promise for most of the people who’ve spent years being truly fat. Despite numerous, lengthy attempts, that promise doesn’t appear to prove true for a great many people, including me personally.

These claims remind me a bit of that “trust your body” position followed by those who adopt Intuitive Eating principles, .. those who tightly close their eyes to all of the Scientific research available which clearly tells us, that what an obese body can be trusted to do is struggle to remain obese or … in the event a fat person manages to lose down to a normal weight … what a reduced obese body can then be trusted to do is to insist on its return to obesity.

I’ve spent quite a lot of time experimenting with these lower-eating/higher-eating concepts, and for me personally, they’ve tended to result in a binge/fast pattern. This is because the absence of a carrot leaves only the stick, and self-punishment is not a sustainable, or highly motivating, factor for me.

Here’s a recent article about Intermitted Fasting which I found interesting.

Is Intermittent Fasting Just Another Fad?
by Daniel Bartlett 2/9/2013 - Huffingtonpost.co.uk

Every year, without fail, a new diet gets media attention and every year I put my head in my hands. The newest trend for 2013 is fasting diets, dusted off and freshly repackaged to appeal to the masses.

Intermittent fasting, or the "5/2 diet", marks an especially exciting period for perpetual dieters, because these plans offer the idea that you can eat anything you like on your non-fasting days. The holy grail of binge eating has finally arrived and I can almost hear the collective sigh of relief across the airwaves.

The concept behind the 5/2 Diet is simple. Eat very restricted calories for two days and eat whatever you like for the other five. To think, most people were only throwing caution to the wind at weekends before. It's akin to telling an alcoholic the best way to cure his drink problem is by having more whisky.

There is nothing wrong with fasting, but nothing particularly new either. Civilizations have been practicing fasting for centuries as there are clear and demonstrated benefits, but the fasting part of the 5/2 diet is not the problem. It's the encouragement of explicitly unhealthy food consumption.

Just the other day I met up with a friend who gleefully informed me of this wonderful new diet whilst washing down a burger and fries with a thick strawberry milkshake. "The best thing about Intermittent Fasting" They said in between giant bites of burger. "Is if I can just get through a couple of days, I can eat whatever I like".

As I left the table I found it hard to believe that an extreme diet of highly processed foods in large quantities followed by periods of abstinence would deliver on its promises.

I know that not everybody following an intermittent fasting plan will eat so poorly in the non-fasting days, but when it comes to the mainstream this is the message that seems to be sticking.

I can hear the advocates of intermittent fasting frantically preparing the multiple studies on mice and fruit flies, ready to tell me about IGF1 and how they are going to live for eternity, and yes, there is evidence that fasting reduces oxidative stress, increases insulin sensitivity and resists the effects of aging. It would seem that there are benefits to reducing total calorific intake but surely not at the sacrifice of quality nutrition.

It may surprise you to learn that I have used fasting to great effect in clients experiencing difficulty losing weight or achieving health goals, but only after more proven methods are failing. In many cases IF does offer a suitable method of busting through a plateau, but in other instances, intermittent fasting leaves people irritable and performing terribly.

Crucially, in cases where intermittent fasting has been introduced successfully it is always alongside a healthy diet. This makes intermittent fasting not only more challenging than other diets, but more unappealing and impossible to follow for all but the most dedicated. You can't sell the stick without the carrot.

The first thing anybody should do to improve health and increase longevity is eliminate processed foods, not introduce them in large quantities on an empty stomach. By eating whole natural foods most people see an immediate benefit to health, weight and energy levels.

David Bartlett is a personal trainer of professional athletes
who owns and runs a holistic health and fitness center in Chiswick, London

For me, as well as many other people (although not everyone), fasting is a form of suffering.

The False Promise involved with Intermittent Fasting diets … the message of eating as much as you want of whatever you want (who wouldn't want that in a weight loss plan?) … is reinforced over, and over again.

"Imagine the freedom that would come from being able to do whatever you want, eat whatever you want and know - not think, not hope, but know for certain - that you'll never gain another pound."

"Eat whatever you want as much as you want. But only eat during ... (a specific time-frame like an 8-hour period, or 5-hour window etc.) ... each day (or on alternate days, or on weekends).

"And the most remarkable thing of all: You only have to follow the diet 3 days a week. Three days a week!" (or 5 days etc.)

Fasting is the Stick.
The Promise of eating what you want on non-fasting days is the Carrot.

Since summer of 2006, I’ve had quite a lot of personal experience with Intermittent Fasting including QOD, Alternate Day Eating, JUDDD, 5/2, Fast-5, The 8 Hour Diet, and Eat Stop Eat, and for me, the Promise has always proven to be false.

The only way Intermittent Fasting works to cause weight-loss, is if “normal” on the eating days is about the same as one’s maintenance energy burn.

For larger, younger people – especially males -- whose daily calorie burn is around 2000 calories, this can be relatively easy for if they “normally” eat that amount and just occasionally eat higher-calorie.
However, I am a small, older female whose “normal” daily calorie burn is around 1050. It is a continual struggle for me to keep my food intake within that “normal” range, and for me … the reward of getting 1050 calories the next day doesn’t seem like much great reward for a day of eating 300 to 500 calories. So, far, despite my best efforts, my results on the up days have often been more like 1400 to 2000 calories … which cancels out any weight-loss results of the 300 to 500 calorie fast days, … while still being FAR LESS than the amounts I really want to eat after a day, or alternate days, of calorie deprivation.

Fasting is in and of itself, "a form of suffering" for me and many other people, ... although certainly not for everyone.  Even so, unless some other type of Diet / way-of-eating / lifestyle comes along that works well for me to maintain my body within a "nomal" weight-range, I expect I will continue doing further such experiments with diets that contain the promise of even an illusory “carrot”, because that’s the kind of thing I do as a part of my Dieting Hobby.